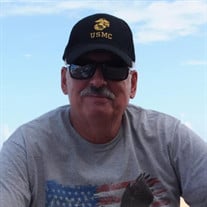 William C. Lancaster, Jr. a lifetime resident of Peekskill, NY, died on Sunday, February 7, 2021. He was born on April 26, 1939 to William C. Lancaster, Sr. and Vera Petrocine. In 1957, he graduated from Peekskill High School. Shortly thereafter, he enlisted and became a proud member of the United States Marine Corps., where he served in Okinawa. He married his high school sweetheart, Regina Baxter on May 26, 1962. Together they raised their two daughters and ran their family business, Enterprise Press. Bill was the owner operator of the printing business that was begun by his parents in 1931. In 2012, Enterprise Press and the Lancaster family were among those honored as one of the oldest family owned businesses in Peekskill. Bill was a life member and past president of Cortlandt Hook and Ladder Co. #1, where he spent many happy years making lifelong friends. He was also a member of Peekskill Rotary and the Lincoln Society. He was an avid golfer who also enjoyed music and playing his guitars, his annual trips to Las Vegas, and his countless summers in Rhode Island surrounded by his family and friends. Bill is survived by his loving wife Regina, his daughters Kim Lancaster and Marci Lane and his son-in-law Gower Lane. In addition, he leaves behind two grandchildren Carly and Madison Lane, brother-in-law Frank (Nadine) Baxter and his former sister-in-law Donna Pilzer, as well as several nieces and nephews, cousins and many dear and close friends. In lieu of flowers, donations can be made in his name to the NY State Veterans Home at Montrose (2090 Albany Post Rd, Montrose, NY 10548) where he received such loving and compassionate care. A private viewing will be held on Saturday, February 13th at Dorsey-Carlone Funeral home followed by a public funeral mass at the Assumption Church at 11:30am.

The family of William C. Lancaster Jr. created this Life Tributes page to make it easy to share your memories.

Send flowers to the Lancaster family.