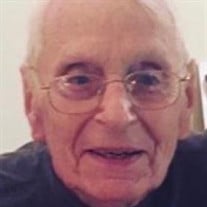 William Marcus Durr, 93, of Buchanan, NY passed away peacefully Saturday, April 25th at Cortlandt Health Care, Cortlandt Manor, NY. Born March 29th, 1927, he was the son of the late Marcus and Veronica (Lohr) Durr. Bill grew up in Buchanan and graduated from Hendrick Hudson High School. He then served in the Army. Shortly after that, he married the love of his life Hildegard Marion Fassnacht. Bill was a carpenter by trade. During his 65 years as a resident of Buchanan, Bill served the community in many ways: Volunteer Fireman, Village Trustee, Building Inspector, Board Member of the Cortlandt Ambulance Corp., and Usher at St. Christopher’s Church. Bill was not only committed to Hilda for their 69 years of marriage but also had a strong Catholic faith. His interests outside of raising five children included Square Dancing, Bible Study and being a member of the Buchanan Seniors. Bill’s greatest pleasure came from watching his 13 grandchildren grow up, receive their Sacraments, play school sports, participate in concerts and graduations and get married. He was blessed with 9 great grandchildren. He is survived by his loving wife Hilda, Five Children: William & Diane Durr of Cold Spring, Kenneth & Nancy Durr of Fishkill, MaryAnn & Frederick Boniello of Millsboro, DE, John & Christine Durr of Wappinger Falls, and Michael & Dorothy Durr of Ooletewah, TN. He was predeceased by his sister Catherine Lyman and brother George Durr. Donations in his memory can be made to: Birthright, PO Box 468, Peekskill, NY 10566 Cortlandt Ambulance, 6 Kings Ferry Rd., Montrose, NY 10548 Services for Bill Sr. are private at this time. Please leave a condolence for the family on our website.

The family of William M. Durr Sr. created this Life Tributes page to make it easy to share your memories.

Send flowers to the Durr family.