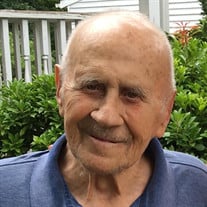 Vito Amenta of Cortlandt Manor, 97, died early Monday morning November 22, 2021 with his family by his side. Born February 19, 1924 in Villalba, Italy, he was the son of Loreto and Carlotta (Cumella) Amenta. He is survived by his beloved wife, Josephine (Ranere) Amenta and his two daughters Carlotta (Ed) Amenta -Pittman and Antoinette Mazzella. He was a devoted grandfather to Jessica, Lori Ann (Bobby), Christopher, Alexandra, Marianne, Marina (Dave), Joseph, Michele (Dave), Jason Sr. Vito was also a doting great grandfather to Gerry, Gianna, Kaylee, Anthony and Lorenzo, Makayla, Abigail, Logan, Aiden, Layla, Jason Jr. and his newest, soon to be born, great granddaughter. Many cherished nieces and nephews also survive. He was a loving sibling to his brother Guiseppi and sister Concetta both of whom predeceased him. Vito’s journey from Italy to America began when he started corresponding with his future wife, Josephine. After developing a relationship through letters and photos, Josephine traveled to Italy with her mother where they met and fell in love. July 2, 1960 was their wedding date and from there they moved to the Bronx and began their family. A skilled ironworker, Vito owned his own business, Primo Ironworks in Mt Vernon. There he designed, created, and installed ornamental iron pieces. Music, especially his violin, held a special place in Vito’s heart. He played throughout his life, even in his later years entertaining his family on Sunday afternoons. His other passion was for his gardens. Flowers and vegetable gardens both were taken care of with energy and enthusiasm. To the delight of all, Vito also made his own wine! Our Vito, Daddy, Nonno will be greatly missed. His contagious laugh and his stories will be with us forever.

Vito Amenta of Cortlandt Manor, 97, died early Monday morning November 22, 2021 with his family by his side. Born February 19, 1924 in Villalba, Italy, he was the son of Loreto and Carlotta (Cumella) Amenta. He is survived by his beloved wife,... View Obituary & Service Information

The family of Vito Amenta created this Life Tributes page to make it easy to share your memories.

Send flowers to the Amenta family.