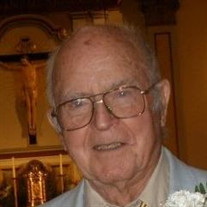 Stephen Bobolia, a lifetime resident of Peekskill, passed away peacefully at home on March 11, 2018 with family by his side. Stephen was born in Peekskill on January 8,1918 to Stephen and Mary Keic Bobolia. He grew up on Highland Avenue and attended Peekskill City Schools. A 1935 graduate of Peekskill High School, he was "One of the school's most brilliant and diligent students," according to his yearbook. He went on to serve in the United States Army. On October 14, 1950 Stephen married his sweetheart, Lorraine Verderosa, and the couple went on to live happily ever after in the home they built with their own hands. Stephen and Lorraine made beautiful music together, singing in local musical productions at the Garrison Depot. They were also longtime members of the Assumption Church Choir. Stephen enjoyed playing tennis and golf with family and friends, long walks with his sweetheart, tending to his garden, playing the piano and guitar, telling stories and reciting Spoonerisms like "Beeping Sleauty" and "Rindercella". When he wasn't busy entertaining and being the life of the party he could be found napping. He loved his naps, coffee and dessert. Stephen was a longtime volunteer with the Salvation Army and was a member of the Hendrick Hudson Lions Club. He was a Bookkeeper and retired from Stony Lodge Hospital. Although he never had children of his own, he was like a father to many nieces and nephews.He gave so much love to so many. He is survived by brothers George and Paul Bobolia and countless nieces and nephews. He was predeceased by his wife Lorraine, sisters Eva,Helen, Mary & Rose and brothers John and Nick. At the end of every family gathering and party they attended, Steve and Lorraine would sing their own rendition of “A Real Nice Clambake” from the Musical “Carousel”. Thanks for the wonderful party of life you gave us, Uncle Stevie. We all had a real good time. A Real Nice Party This was a real nice party We’re mighty glad we came The vittles we ‘et were good you bet The company was the same Our hearts are warm Our bellies are full And we are feeling prime This was a real nice party And we all had a real good time

Stephen Bobolia, a lifetime resident of Peekskill, passed away peacefully at home on March 11, 2018 with family by his side. Stephen was born in Peekskill on January 8,1918 to Stephen and Mary Keic Bobolia. He grew up on Highland Avenue and... View Obituary & Service Information

The family of Stephen Bobolia created this Life Tributes page to make it easy to share your memories.

Stephen Bobolia, a lifetime resident of Peekskill, passed away...

Send flowers to the Bobolia family.