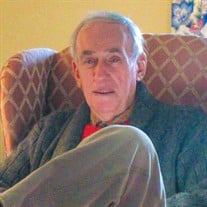 Ronald P. Fritz, devoted husband and loving father, grandfather and great-grandfather, passed away peacefully of natural causes at New York Presbyterian Lawrence Hospital during the height of the pandemic on May 2, 2020, two days before his 93rd birthday. He was born May 4, 1927, in Camden, N.J. to Harry and Lillian Birchmeier Fritz. Following high school he served honorably in the United States Army Air Forces from 1945 to 1947, receiving the Philippine Independence Ribbon and the World War II Victory Medal. Following military service he attended the Philadelphia Museum School of Art and the Art Students League in New York City, where he studied under Yasuo Kuniyoshi. A highly successful painter, illustrator and animator, his artwork has been included in the Permanent Collection of American Art at the Library of Congress. The New York animation studio he co-founded, D&R Productions, Inc., created animated specials for NBC and CBS including "It's a Brand New World", and commercials for household names like Cocoa Puffs, Mountain Dew, Cracker Jack, Chevrolet, and the Broadway production of La Cage aux Folles. They also animated the television version of Maurice Sendak's "Really Rosie". Prize winning productions include "The Mechanical Man", a short film screened at the 1970 Cannes Film Festival Directors' Fortnight which also received a CLIO Award the same year. He was also a popular illustrator of children's magazines and books in his own right. His work has been published by, among others, Doubleday, Simon and Schuster, and Scholastic, and include well known titles such as "Thomas the Tiger Teacher", "Tongue Twisters" and "My Dog Talks". He is also the published author of the novel "Tink's Trip",. An active member of the Peekskill community for many years, he served as a member of the city parking commission. He is survived by his children and their spouses: son Mark and wife Sharon, daughter Rhonda Finnerman and husband Walter, son Christopher and wife Janet, daughter Valerie Lorenzo, daughter Jenifer Agostini and husband Raymond, and son Philip and partner Judy DeGraff; by his grandchildren: Harrison Fritz and wife Meggie, Derek Fritz and wife Amanda, Liliana Fritz Singerman and husband Alex, Karsten Fritz, Justin Wilson, Shannon Wilson Ross and husband Patrick, Nikki Bechard and wife Rebecca, Danielle Fritz and husband Dane Austin, Marni Fritz, Peter Lorenzo, Christine Lorenzo, Raymond Agostini, Ian Agostini and Aaron Agostini; and by his great-grandchildren Sloane and Holden Fritz, Felix and Simon Wilson, Connor Ross, and Raven Fritz-Austin. He is preceded in death by his beloved wife of 50 years, Martha B. Voytko Fritz. His much loved sister, Constance Fritz Stasny, also passed away in 2020. He will be remembered for his family devotion, kindness, strength of character, and wonderful sense of humor. A Memorial Celebration is scheduled for May 14, 2022 beginning at 11:00 AM with a brief graveside service at Assumption Cemetery in Peekskill, N.Y., followed by a luncheon reception for family and friends.

Ronald P. Fritz, devoted husband and loving father, grandfather and great-grandfather, passed away peacefully of natural causes at New York Presbyterian Lawrence Hospital during the height of the pandemic on May 2, 2020, two days before his... View Obituary & Service Information

A celebration of Ronald P. Fritz's life will be held May 14, 2022. Please share your memories here...

Send flowers to the Fritz family.