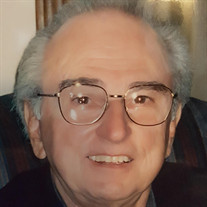 Bob Vonick passed away on Saturday, January 6 at the age of 91. He was the son of Michael H. and Elizabeth Quaka Vonick who settled in Scarsdale in the early 1920s. One of four children, Bob was born on December 23, 1926. He attended Cardinal Hayes High School. In December 1944 on his 18th birthday, the youngest age one could volunteer to serve our country, he joined the U.S. Navy during World War II, He was based in Jacksonville, Florida, serving as an Aerial Gunner and Aviation Radioman using Morse code. After the War, he joined the Civil Air Patrol in 1946 operating out of Westchester County Airport while completing his education at Scarsdale High School. He attended the Chicago Institute of Technology graduating with a degree in Civil Engineering. He married Anne G. Traynor of Forest Hills, NY in 1950. He worked for a number of years supervising the construction of housing developments and condominiums throughout Westchester County. In 1968, he assumed ownership of Michael H. Vonick, Inc., a residential construction company based in Scarsdale specializing in home additions and alterations throughout Westchester County. He was an active volunteer in various organizations throughout Westchester County including: • The Scarsdale Rotary Club, serving as President and Chair of a number of its Committees during his 30+ years of membership. He was the recipient of the Paul Harris Award from the Scarsdale Rotary Club for his outstanding public service. • The Scarsdale-Edgemont Family Counseling Service, serving as a member of the Board of Directors during his 12 tenure. • The Westchester-Rockland Chapter of the Leukemia Society of America in 1972 for which he was elected as its first President, serving the organization for many years as a member of its Board of Directors. • The Scarsdale Chamber of Commerce, serving on its Board of Directors and as a long-term active member. • New Rochelle Opera serving on its Board of Directors. • Northeast Yonkers Little League Baseball serving as First Commissioner. • The American Cancer Society for Scarsdale serving as its Chairman. • Scarsdale American Legion Post 52. • The Scarsdale Town Club. • Candlewood Knolls Community Association, New Fairfield, CT, President and serving on its Board of Directors. He is survived by his five children: Robert Vonick, Lolly Glennan, Anne Vonick, James Vonick, Beth LaCour, their spouses Carole, Don, Stephen, and Patty, 9 grandchildren, and beloved friend Lucille DeBellis. His former spouse, Anne Traynor Vonick, and one grandchild, Luke LaCour, predeceased him. He rests in the Veteran’s Gerald B.H. Solomon Saratoga National Cemetery in Schuylerville, NY next to his brother, Chick Vonick. A memorial mass will be celebrated on January 20, at 12 noon, at Immaculate Heart of Mary Church in Scarsdale. In lieu of flowers, any contributions can be made to the Gary Sinise Foundation, supporting Veteran amputees. Dorsey-Carlone Funeral Home in Peekskill, NY is supporting the family. Please visit Bob’s personalized webpage. https://www.garysinisefoundation.org/#SnowballModal

Bob Vonick passed away on Saturday, January 6 at the age of 91. He was the son of Michael H. and Elizabeth Quaka Vonick who settled in Scarsdale in the early 1920s. One of four children, Bob was born on December 23, 1926. He attended Cardinal... View Obituary & Service Information

The family of Robert Vonick created this Life Tributes page to make it easy to share your memories.

Send flowers to the Vonick family.