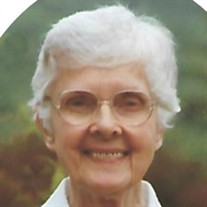 Sister Patricia Shaughnessy, age 91, a Franciscan Sister of the Atonement from Graymoor, died on Thursday, June 22, 2017 in Lurana Health Care Residence at St. Francis Convent, Garrison, NY. Sister Patricia was born in Holyoke, MA and was the daughter of Nora Margarete (Otto) and William Shaughnessy. Predeceased by her parents and a brother, William, she is survived by her Sisters in Community and her brother, John of Brandenton Beach, Florida, as well as several nieces and nephews. Entering the Community on September 24, 1956, Sister professed her first vows on April 16, 1958 and her final vows on August 31, 1963. As an Atonement missionary, Sister ministered in East St. John, New Brunswick, CAN; Bandon, OR; Oildale, CA; Rockland, ME; the Washington Retreat House, Washington, D.C., and at St. Anthony’s Guest House in Assisi, Italy, where she, as an artist, served for one year creating Franciscan cards which are still sold in our Graymoor Sisters’ Gift Shop today. Sister’s New York ministries included: Amsterdam, Cobleskill, Port Leyden, Rocky Point, L.I., and the Sisters’ Retreat House at Graymoor. Sister returned to Graymoor in June 1988 and in 1994 began teaching art to children in grades K-8 at St. Columbanus School in Cortlandt Manor, NY until she retired. On Sunday, June 25, 2017, the Reception of the Body prayer service will be held at 4:00 p.m. in the Motherhouse Chapel and the Evening Prayer/Wake Service will be at 7:00 p.m. Sister’s funeral Mass will be in the Motherhouse Chapel on Monday, June 26, 2017 at 11:00 a.m. Burial will be in the Sisters’ Cemetery at Graymoor. Funeral arrangements by Dorsey-Carlone Funeral Home.

The family of Sr. Patricia Shaughnessy SA created this Life Tributes page to make it easy to share your memories.

Sister Patricia Shaughnessy, age 91, a Franciscan Sister of the...

Send flowers to the Shaughnessy family.