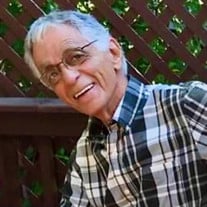 The family of Mitchell Majeed Maloof of Putnam Valley, NY, is deeply saddened to announce his passing on December 1st at the age of 86. He is survived by the love of his life, Teresa Rose Turck Maloof; by his children, Christine Corso (Vincent Corso) of Cedar Grove, NJ, and Rich Maloof (Kristin Aswad) of Maplewood, NJ; and by his five adoring grandchildren, Julia Corso, Peter Corso, Daniel Maloof, Tess Maloof and James Maloof. A pillar of his family, Mitch was a mentor to nephews and nieces, a treasured brother, son, and son-in-law, and a loyal friend. Mitch loved skiing, working with his hands, beautiful music, old Thunderbirds, and a good argument. Above all, he loved his wife of 60 years. Together they traveled extensively, broke bread with friends around the world, and danced at celebrations with a grace not seen in a generation. After raising their children in Pomona, NY, they lived in a lakeside home built almost entirely with his own hands. A gifted woodworker, Mitch lovingly crafted dozens of fine works that fill his home and his children’s homes. He could fix anything, and did, fearlessly tearing out walls and dismantling engines and rebuilding boat docks. He was a dogged problem-solver who made things better. Born to Lebanese parents in a poor neighborhood of Boston, Mitch was the second born of six children. From modest beginnings he would grow to fulfill the dream of immigrant families and exemplify the self-made man. He attended the Boston Latin School and Northeastern University, and was drafted as a navigator in the U.S. Air Force (non-activated), which may explain why he was frequently telling people where to go. An early career in technology, including work on the first IBM mainframes, led to work with airlines around the globe. Mitch was possessed of a fierce independent streak, and eventually became self-employed, forming partnerships from Sydney to Dubai. Those who knew and loved Mitch recognized a man with a stern brow undermined by a ready smile and a soft heart. In the spirit of kindnesses shown to him as a child, please consider donating to a local food bank in his name. The family will announce a memorial gathering to celebrate his life at a later date.

The family of Mitchell Majeed Maloof of Putnam Valley, NY, is deeply saddened to announce his passing on December 1st at the age of 86. He is survived by the love of his life, Teresa Rose Turck Maloof; by his children, Christine Corso (Vincent... View Obituary & Service Information

Please share your memories of Mitchell on this page. A Memorial Gathering at a later date will be announced.

The family of Mitchell Majeed Maloof of Putnam Valley, NY, is...