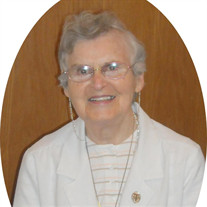 Sister Mary Nestor Prévost, age 96, a Franciscan Sister of the Atonement from Graymoor, died on July 2, 2019 at Lurana Health Care Residence of St. Francis Convent, Garrison, NY. Sister Mary Nestor Prévost was born in Montreal, Québec, Canada on October 20, 1922 to Margaret (Crampton) and Nestor Prévost. Sister is survived by her Sisters in Community and several nieces and nephews. She is predeceased by her sister, Sr. Mary Kathleen Prévost, SA, and her brothers, Vincent and Rev. Normand Prévost, SA. Sister entered the convent as an Oblate on October 14, 1938 and became a Postulant on August 16, 1939. She professed her First Vows on June 5, 1941 and her Final Vows on August 23, 1947. As an Atonement missionary, Sister served in parish, catechetical and pastoral ministries in New York State (Ogdensburg, Schenectady, Dannemora, Brushton, Canajoharie, New York City, Ticonderoga, Athens, Amsterdam, Altamont and Albany), as well as New Hampshire State (Farmington), Utah State (Roosevelt), California State (Lindsay & Bakersfield) and Oregon State (Newport & Bandon) before returning to Graymoor in 2009. After returning to Graymoor, Sister continued to do hospital visiting and brought Holy Communion to the sick until 2017. On Sunday evening, July 7, 2019, the Reception of the Body prayer service will be held at 4:00 p.m. and the Evening Prayer/Wake Service will be at 7:00 p.m. Sister’s funeral Mass will be held on Monday morning, July 8, 2019 at 11:00 a.m. All services are held in the Motherhouse Chapel at St. Francis Convent, Graymoor. Burial will be in the Sisters’ Cemetery.

The family of Sr. Mary Nestor Prevost SA created this Life Tributes page to make it easy to share your memories.

Send flowers to the Prevost family.