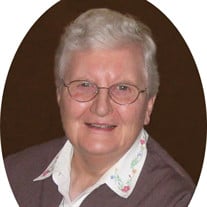 Sister Mary Kathleen Murray, a Franciscan Sister of the Atonement from Graymoor, entered into the Kingdom of God’s glory during the early morning hours of Saturday, March 27, 2021 in the Lurana Healthcare Residence at St. Francis Convent, Garrison, New York. Born on May 20, 1934 in Ballyshannon, Co. Donegal, Ireland to Kathleen (Marsh) and Vincent Murray, Mary Kathleen was one of five children. Besides her parents, she is predeceased by two brothers: Rev. Patrick F. Murray and Vincent Murray. She is survived by her sister, Teresa Murray, and her brother, Monsignor Raymond Murray, both of Northern Ireland. Having entered the Community as a Postulant in Ireland on August 15, 1950, Sister later became a Novice on October 2, 1951 and professed her Vows on the feast day of Saint Francis, October 4, 1952. She professed her Perpetual Vows on August 30, 1958. As an Atonement missionary for 69 years, Sister Mary Kathleen served for numerous years in parishes where she coordinated religious education programs, taught the Catholic faith to numerous children and adults, visited the sick and elderly in their homes and in hospitals. Sister also ministered in a children’s crisis program supporting them in their efforts to recover from the trauma of domestic violence in the home. Sister Mary Kathleen was a gifted musician and had “dancing fingers” upon the keys of a piano. On every mission, music was a great part of her ministerial responsibilities as she led choirs and congregations to praise the Lord in song. Sister also had a special ability to ‘give time’ to others and had a quick and sharp memory for remembering the names of everyone whom she was asked to pray for. She was a “prayer warrior” for many who asked for her supportive prayers. Sister’s ministries for the Lord took her from Ireland, to the Eastern and Western Coasts of the United States, as well as into Western Canada. Her first mission in 1952 was in Alamosa, Colorado. From there, she sowed the Word of God in New Jersey (Deal), Rhode Island (Harrisville), California (Woodland), New Hampshire (Lincoln, North Conway & Pittsfield), Utah (West Jordan), Canada (Edmonton, AB), Washington, DC (at our Washington Retreat House). She returned to Graymoor in September 1999 to assume the role of Co-Coordinator of the Motherhouse and tend to the needs of the facility and Sisters at that time. In 2004, she became the Motherhouse liturgist for two years, retiring at the age of 71 due to health issues. When no longer able to be involved in active ministry, praying for others became her primary ministry. When asked, “How do you want to be remembered?,” Sister Mary Kathleen said, “ … for being just who I was!” She had a hearty laugh, a twinkle in her eyes, and a bright smile upon her face. Due to the Coronavirus pandemic, services will be private. All services will be in the Motherhouse chapel at Graymoor. Burial will be in the Sisters’ cemetery at Graymoor. In lieu of flowers, donations may be sent to: Franciscan Sisters of the Atonement, 41 Old Highland Turnpike, Garrison, New York 10524 (USA).

Sister Mary Kathleen Murray, a Franciscan Sister of the Atonement from Graymoor, entered into the Kingdom of God&#8217;s glory during the early morning hours of Saturday, March 27, 2021 in the Lurana Healthcare Residence at St. Francis... View Obituary & Service Information

The family of Sr. Mary Kathleen Murray SA created this Life Tributes page to make it easy to share your memories.

Sister Mary Kathleen Murray, a Franciscan Sister of the Atonement...