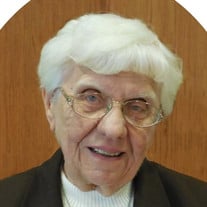 Sister Mary Trinitas (Mary Elizabeth) Mayer, age 91, a Franciscan Sister of the Atonement from Graymoor, transitioned into God’s glory on February 18, 2019 at the New York-Presbyterian Columbia Hospital in New York City after a brief illness. Sister Mary Trinitas ~ fondly referred to in Community as “Trini” ~ was born on August 22, 1927 to Katherine (Gonscar) and John J. Mayer in Schenectady, NY. Besides her parents, Sister Mary Trinitas is predeceased by her brother, John, and her sister, Phyllis C. O’Connor. Sister is survived by her Sisters in Community and her nieces and nephews to whom she is very near and dear. Entering the Community on March 19, 1946, Sister professed her first vows on October 28, 1947 and her final vows on August 29, 1953. As an Atonement missionary, she served in parish, catechetical, pastoral and retreat ministries in Michigan (Plymouth); New York (Lyon Mountain, Hogansburg, Cadyville, Canajoharie, Amsterdam, St. Cecilia’s Mission NYC, So. Glens Falls, Queensbury and Graymoor); New Jersey (Camden); Rhode Island (Harrisville); Canada (Vancouver, BC); Washington, DC (Washington Retreat House); and Connecticut (Byram). Sr. Mary Trinitas also served as the Novice Directress from 1975–1981, and later, as Directress of Temporary Professed Sisters from 1997–1999. Sister returned to Graymoor in November 2012. On Thursday, February 21, 2019, the Reception of the Body prayer service will be held at 4:00 p.m. and the Evening Prayer-Wake Service will be at 7:00 p.m. The Funeral Mass will be at 11:00 a.m. on Friday, February 22, 2019. All services will be held in the Sisters’ Motherhouse Chapel at Graymoor. Burial will be in the Sisters’ Cemetery. Website: https://www.dorseycarlonefuneralhome.com/

The family of Sr. Mary Trinitas Mayer, SA created this Life Tributes page to make it easy to share your memories.

Send flowers to the Mayer, family.