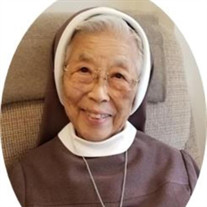 Sister Mary Laetitia (Yoshiko) Toyoda, a Franciscan Sister of the Atonement at Graymoor, transitioned into God’s glory on Tuesday evening, February 2, 2021 in the Lurana Healthcare Residence at St. Francis Convent. Born on October 19, 1930 in Zushi-machi, Kanagawa Pref., Japan to Margaret Mary (Aiko Kishii) and Joseph Paul (Shigeo) Toyoda, Sister was the eldest of eight children. Besides her parents, Sister is predeceased by four brothers: Shigenori (Tony), Chitose (Paul Joseph), Masakuni (Francis) and Fumio (John Vianny). She is survived by two sisters who are nuns in a Trappistine Abbey in Japan, Sister Marie Joseph (Kazuko) and Sister Angela (Junko); and a married sister, Hiroko (Michaela) Masuda; there are also numerous nieces, nephews and close cousins. Sister entered the Community on July 6, 1951, and became a novice on May 15, 1952. She professed her First Vows on May 16, 1953 and her Perpetual Vows on August 30, 1958. As an Atonement missionary for 68 years, Sister ministered in Canada (Vancouver, Steveston and Greenwood), in Japan (Kawasaki and Kamiyama) and in the United States (Boston, MA and Athens & Garrison, NY). During her early years as a Sister (1953-1956), she was in British Columbia, Canada where she was involved in parish ministry and religious education. Likewise in Japan, Sister taught both religion and English. From 1976 to 78, Sister taught English at the St. Marianna University School of Nursing, and later obtained a translator-receptionist position at the St. Marianna University Hospital in Kawasaki, Japan. She held this position from 1976 to 1995. One of the highlights in her years as a Japanese-English translator, was to be a personal interpreter for Mother Teresa of Calcutta on her lecture tour of Japan in 1981. During these years, Sister was also involved in Caritas Japan and was privileged to work with those who utilized resources to help the poor and needy throughout the world. In this work, she attended international conferences in India, Korea, Canada, Italy and the United States. Due to the Coronavirus pandemic, all funeral services will be private and held in the Motherhouse chapel at Graymoor. Burial in the Sisters’ cemetery at Graymoor will immediately follow the funeral Mass.

The family of Sr. Mary Laetitia Toyoda, SA created this Life Tributes page to make it easy to share your memories.