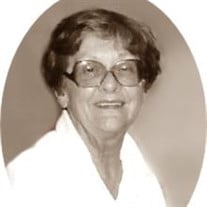 Sister Mary Ann (Victoria Marie) Conto, age 98, a Franciscan Sister of the Atonement from Graymoor, entered the Eternal Kingdom on Thursday, December 9, 2021 in the Lurana Health Care Residence at St. Francis Convent, Garrison, New York. Born in Malone, New York on January 20, 1923, Sister Mary Ann is predeceased by her parents, Pearl B. (Catman) and Wilfred S. Conto as well as her siblings, Norris, Robert, Patrick and Dorothy (Conto) Duffy. She is survived by her Sisters in Community and several nieces and nephews. Sister entered the Community on January 15, 1953, professed her First Vows on October 15, 1954 and her Perpetual Vows on September 3, 1960. As an Atonement missionary for 67 years, Sister served in catechetical, parish and inner-city programs. She also ministered at Our Lady of the Atonement Retreat House at Graymoor as one of the hospitality team members. Sister Mary Ann’s assignments included ministries in: New York (Amsterdam, Cadyville, Canajoharie, Hogansburg, Ogdensburg and Port Henry), Michigan (Milford), Maine (Rockland), Oregon (Lakeview), Vermont (Burlington) and Canada (British Columbia and Cranbrook). Most of these were parish and catechetical ministries teaching people of all ages. From 1979 to 1988, Sister Mary Ann was best known as the “ceramic teacher” to the children at Emmanuel House in Roxbury, Massachusetts, an inner-city program owned by Catholic Charities of the Archdiocese of Boston. The children loved to learn how to make ceramic pieces, glaze, and fire them and then give them as gifts to their family members. Sister helped to create many fond memories for the children. Thank you, Sister Mary Ann, for the fun and joy you created with the children! Sister returned to Graymoor in 1988 and joined the team at the retreat house where she remained for three years until her health began to fail. In 1991, she moved to the Motherhouse and began her ministry of prayer and presence among those who cared for her in the Lurana Healthcare Residence at Graymoor. Due to the Coronavirus pandemic, services were private for the Graymoor Sisters and Friars only. On Wednesday, December 15, 2021, the Evening Prayer wake service was held at 7:00 PM and Sister’s funeral Mass was on Thursday, December 16, 2021 at 11:00 a.m. All services were held in the Motherhouse chapel at St. Francis Convent and interment was in the Sisters’ Cemetery at Graymoor. In lieu of flowers, donations may be sent to: Franciscan Sisters of the Atonement, 41 Old Highland Turnpike, Garrison, New York 10524 (USA). Funeral arrangements by Dorsey-Carlone Funeral Home of Peekskill, New York.

The family of Sr. Mary Ann Conto, SA created this Life Tributes page to make it easy to share your memories.