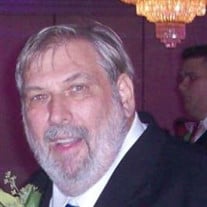 Mark Francis De Paul Pietras, a long time resident of New Windsor, NY passed away on July 1, 2017. He was born on August 8, 1953 in Yonkers, to Edward and Mary Ann Packo Pietras.On June 5, 1982 he married Adrienne Ferris Foster at the Assumption Church, Peekskill. Mark was a 1971 graduate of Saunders Technical High School. He was a foreman at General Motors in Tarrytown until their shutdown in June 1996. After that, he worked for Burns and Roe out of Stewart Airport, and was a Union Steward for Operating Engineers Local 825, Newburgh, until the privatization of the airport in 2007. Mark enjoyed watching the NY Rangers, and playing scratch offs, always looking for the big win! Mark is survived by his wife, Adrienne, daughter Sabrina, sons Michael, Matthew, Timothy (Lisa), Michael & Jacob Esposito, his grandchildren Lucas Esposito, Landyn, Ryleigh, and Amanda Pietras, brothers, Peter and Edward, sister Kathryn, cousins Barbara Ann & John Rusinko, and many nieces and nephews. A funeral service will be held on Friday July 7, at 11 AM at Dorsey - Carlone Funeral Home, 1100 Cortlandt St. Peekskill, NY, followed by interment at Hillside Cemetery, Cortlandt Manor. Visiting on Thursday at the funeral home, 2 - 4, 7 -9 PM.

The family of Mark Pietras created this Life Tributes page to make it easy to share your memories.

Send flowers to the Pietras family.