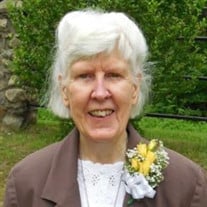 Services are private at this time. Please leave a condolence on our website. Sister Marjorie Ann Moon, a Franciscan Sister of the Atonement from Graymoor died on Saturday, May 2, 2020 at St. John’s Riverside Hospital, Yonkers, NY. Sister Marge was born in Brooklyn, NY on June 23, 1937, an only child to Josephine (Dooley) and Harry Moon. In 1947, the family moved to Conway, NH where Marge was educated through high school. She worked as a waitress in Conway, NH at the famous Presidential Inn, along with her father, a bartender famous for his “Moon’s Dream” drink ~ whose secret recipe he gave to his daughter. On September 8, 1965, Marge entered the Franciscan Sisters of the Atonement. Her lifelong vocation as a Sister was shaped by her Catholic faith and belief in the teachings of Saint Francis of Assisi. Having professed her first vows on August 12, 1968 and her final vows on June 30, 1974, she continued her journey as an Atonement missionary for 54 years. Sister Marge received an Early Childhood Studies degree at the State University of NY College at Cobleskill, NY and she was a marvelous teacher with little children. In one of her earlier assignments at St. Cecilia’s in Manhattan, NY (coincidentally where her mother’s family attended a half century earlier), Sister used her artistic and teaching skills to enlighten the minds of her young students by using her gifts as a guitarist and watercolor painter. For years, Sister’s watercolor paintings were displayed and sold in the Sisters’ Gift Shop at Graymoor. Family, friends and Sisters remember Sister Marge for her cheerful and sunny personality. She was soft spoken with an infectious laugh and was always up for an adventure. Family members still treasure her letters, graced with small paintings and an almost indecipherable handwriting describing her adventures as a Sister in Canada and Italy. Sister Marge served in various ministries throughout her religious life including parish, pastoral, retreat and teaching ministries. She was well known as a pre-school teacher in Conway, NH (1977-1992) and at St. Cecilia’s mission in East Harlem, NY (1974-1977, 1992-1993, 2001-2003). Other mission assignments included: New York State: Schenectady (1969), Cobleskill (1970-1974), OLA Retreat House at Graymoor (1968-1969, 2000-2001); Mt. Vernon (2003-2005) and Mother Lurana House at Graymoor (2008-2010). She also ministered in the following countries: Canada: Edmonton, AB (1969-1970 & 2005-2008); Italy: Rome (1993-1995 & 1997-2000) and Assisi (1995-1998). She returned to the Motherhouse at Graymoor in September 2010. In June 2015, Sister celebrated her Golden Jubilee (50 years as a Sister). Besides her Sisters in Community, she is survived by her first cousins Francis Moon (Ithaca, NY), John Moon (Belmar, NJ), George Moon (Lake Ronkonkoma, NY), and Ellen Byrne O’Shaughnessy (New Port Richey, FL), and many second cousins. Due to the Coronavirus pandemic, services are postponed until a later date and will be announced via emails and on facebook.com/Graymoor.Sisters. If interested in receiving an email notification, send your name and email to [email protected] In lieu of flowers, donations can be made to “Franciscan Sisters of the Atonement” and mailed to Development Office, 41 Old Highland Turnpike, Garrison, NY 10524. Eternal rest grant unto her, O Lord … and let perpetual light shine upon her.

Services are private at this time. Please leave a condolence on our website. Sister Marjorie Ann Moon, a Franciscan Sister of the Atonement from Graymoor died on Saturday, May 2, 2020 at St. John&#8217;s Riverside Hospital, Yonkers, NY. Sister... View Obituary & Service Information

The family of Sr. Marjorie Moon, SA created this Life Tributes page to make it easy to share your memories.

Services are private at this time. Please leave a condolence...