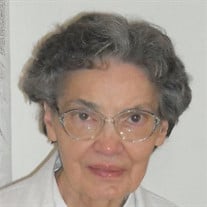 Sister Margaret Ann Ryan, age 83, a Franciscan Sister of the Atonement from Graymoor, died on December 20, 2017 at NY/Presbyterian Hudson Valley Hospital, Cortlandt Manor, NY. Sister Margaret Ann was born in Lyon Mountain, NY on August 23, 1934 to Myra Ida (Brusso) and Henry Ryan. She is survived by siblings: Francis, Bernice Sharkey, Patricia Stotler, Rita Wojewodzic and numerous nieces and nephews. She is predeceased by her parents and siblings: Robert, Henry and Michael, Bernardette Golovach, Hildred Barton, Eva Bacchini, and Sr. Kathleen Ryan, who was also a Franciscan Sister of the Atonement. Entering the Community on September 8, 1955, Sister professed her first vows on May 1, 1957 and her final vows on September 1, 1962. As an Atonement missionary for 60 years, Sister ministered in parish, catechetical, and pastoral ministries in New York (Cobleskill, Mechanicville, Graymoor/Motherhouse, Mother Lurana House and the Sisters’ Gift Shop). She served in Canada (Cranbrook, British Columbia, East St. John’s, New Brunswick, and Smoky Lake, Alberta). Then, from 1972-1981, Sister served as the Secretary General of the Congregation, and later, in 1982-87, as secretary at Catholic University of America in Washington, DC before returning to Graymoor in 1991 to continue various Congregational ministries. On Thursday, December 28, 2017, the Reception of the Body prayer service will be held at 4:00 p.m. in the Motherhouse Chapel and the Evening Prayer/Wake Service will be at 7:00 p.m. Sister’s funeral Mass will be in the Motherhouse Chapel on Friday, December 29, 2017 at 11:00 a.m. Burial will be in the Sisters’ Cemetery at Graymoor. Funeral arrangements by Dorsey-Carlone Funeral Home.

The family of Sr. Margaret Ann Ryan SA created this Life Tributes page to make it easy to share your memories.

Sister Margaret Ann Ryan, age 83, a Franciscan Sister of the...

Send flowers to the Ryan family.