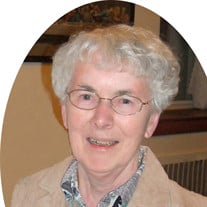 Sister Margaret Mullin, 81, a Franciscan Sister of the Atonement from Graymoor, died on Tuesday, October 14, 2014 at the Lurana Health Care Residence of St. Francis Convent, Garrison, NY. Sister Margaret was born on April 14, 1933 to Margaret (Kiernan) and Patrick Mullin in Ballinamore, Co.Leitrim, Ireland. Sister is predeceased by two brothers, Patrick and Frank, and is survived by her sister, Sr. Jacinta Mullin, SA of Graymoor and her brother, John, of Manchester, England, as well as numerous nieces and nephews. Sister entered the Franciscan Sisters of the Atonement in Ireland on March 7, 1948 and entered the Postulancy at Graymoor on April 17, 1949. She professed her first vows on October 24, 1950 and her final vows on September 1, 1956. As an Atonement missionary, Sister served in parish,catechetical and retreat ministries in California (San Juan Bautista and Oroville); New York (Dannemora, Cadyville, Brushton, Malone, and St. Cecilia’s, NYC); Canada (Castlegar and Vancouver); Rhode Island (Harrisville); and Vermont (Burlington). In 1977, Sister received her BA in Religious Studies from Notre Dame College, Manchester, NH. In the early 1980’s, Sister was a formation directress within her congregation, and served on the Leadership Team from 1986-1991. For 15 years of her religious life, Sr. Margaret ministered at the Washington Retreat House, Washington, DC; serving as Director from 1999 to 2005. She also ministered at L’Arche in Washington, DC (1997-1998), later returning to the Washington Retreat House. Sr. Margaret returned to Graymoor in August 2010. On Friday, October 17, 2014 the Reception of the Body service will be held at 4:00 p.m. in the Motherhouse chapel and an Evening Prayer/Wake Service will be at 7:00 p.m. The funeral Mass will be on Saturday, October 18, 2014 at 11:00 a.m. Services are held in the Motherhouse chapel at St.Francis Convent, Graymoor. Burial will be in the Sisters’ Cemetery. Funeral arrangements by Dorsey-Carlone Funeral Home.

The family of Sr. Margaret Mullin S.A created this Life Tributes page to make it easy to share your memories.

Sister Margaret Mullin, 81, a Franciscan Sister of the Atonement...

Send flowers to the Mullin family.