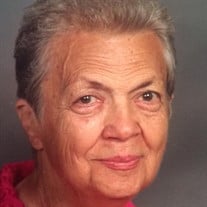 Margaret Malles Kiley a lifelong Buchanan and Peekskill resident, died on Thursday November 17, 2016 at the age of 85. Margaret was born to Harry and Anna (Orendach) Malles on May 28, 1931. She was one of 8 brother and sisters born in the family home on Henry Street in Buchanan. She was a graduate of Hendrick Hudson High School. On June 29, 1957, she married the love of her life, James Kiley, at St. Christopher’s Church, Buchanan. He predeceased her in 1986. Margaret was retired from the NY State Unemployment Office in Peekskill, where she worked for many years as a secretary. She was actively involved in her parish, Assumption Church, in Peekskill, where she belonged to the Legion of Mary, the Columbiettes, the Choir, was a Eucharistic Minister and a Bingo Volunteer. Margaret also enjoyed being a member of the Peekskill Senior Citizen Club. Margaret is survived by her siblings Mary Knickerbocker, George (Dorothy) Malles, all of Buchanan, and Theresa Vafiades of California, her much loved God children, nieces and nephews, Fran Frye, Harry Malles, Tom Frye, Dora Koehler, Jack Malles, Theresa Knickerbocker, Susan Niwinski, Bill Malles, George Knickerbocker, Robin Pasquale, Michael Niwinski, Dennis Malles, Joanne Walsh, Jill Young, Christopher Malles, Diane Fantone, Ann Michele Stratton, Anna Vafiadis, Nick Vafiadis, Maria Vafiadis and Harry Vafiadis. She is predeceased by Georgia (Joseph) Frye, Harry(Mary Alice) Malles, John (Barbara) Malles, Anna (Edward) Niwinski, and George P Malles. A mass of Christian burial will be held on Tuesday November 29, 2016 at 11:30 AM, Assumption Church, Peekskill, followed by interment at Assumption Cemetery, Cortlandt Manor. Visiting at Dorsey – Carlone Funeral Home, 1100 Cortlandt St., Peekskill, on Sunday and Monday 4 – 8 PM. In Lieu of flowers, donations may be made in Margaret's name to St Jude Childrens’ Research Hospital. www.St Jude.org

Margaret Malles Kiley a lifelong Buchanan and Peekskill resident, died on Thursday November 17, 2016 at the age of 85. Margaret was born to Harry and Anna (Orendach) Malles on May 28, 1931. She was one of 8 brother and sisters born in the family... View Obituary & Service Information

The family of Margaret A. Kiley created this Life Tributes page to make it easy to share your memories.

Send flowers to the Kiley family.