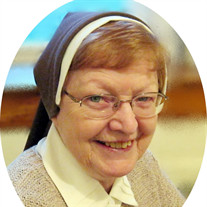 Sister Margaret Liam (Sarah) Glenane, age 89, a Franciscan Sister of the Atonement from Graymoor, transitioned into God’s glory on the Feast of Saint Joseph (her favorite Saint), Tuesday evening, March 19, 2019 at Lurana Health Care Residence at Graymoor, Garrison, New York. Sister Margaret Liam was born in Waterdale, Co. Galway, Ireland on April 13, 1929 to William and Margaret (Greally) Glenane. Predeceased by her parents and siblings, William, Bridie Scully, Ellen Killien, Ann Coen, Kathleen Naughton, Mary and Sr. Norah Glenane, she is survived by her sisters, Margaret Scully, Mary Theresa and Sr. Mary Damien Glenane and her Sisters in Community, as well as numerous nieces and nephews. Having entered the Community as a postulant in Ireland on February 5, 1947, Sister later sailed to the United States and arrived at Graymoor on November 1, 1947. She entered the Novitiate on May 1, 1948 and professed her first vows on May 26, 1949 and her final vows on August 28, 1954. As an Atonement missionary for 72 years, Sister ministered in parish, catechetical, pastoral and retreat ministries at the Washington Retreat House in Washington, DC, New Hampshire (North Conway and Lincoln), in New York State (Morrisonville, Schenectady, Mechanicville), Utah (Roosevelt), Ireland (Rossinver), Pennsylvania (Philadelphia, and at St. Anthony’s Shrine, Pittsburgh), before returning to Graymoor in October 2011. On Sunday, March 24, 2019, the Reception of the Body prayer service will be held at 4:00 p.m. and the Evening Prayer/Wake Service will be at 7:00 p.m. Sister’s funeral Mass will on Monday, March 25, 2019 at 11:00 a.m. All services held in the Sisters’ convent chapel at Graymoor (41 Old Highland Turnpike, Garrison, NY 10524). Burial will be in the Sisters’ Cemetery at Graymoor.

The family of Sr. Margaret Liam Glenane SA created this Life Tributes page to make it easy to share your memories.

Send flowers to the Glenane family.