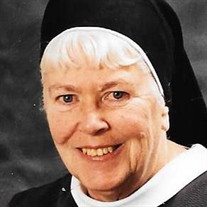 Sr. M. Antonia Maguire of the Holy Eucharist (Muriel Ann Maguire) joyfully entered into eternal life on April 25, 2017. Sister was born in New York City on March 12, 1931, graduated from PS 52, Cathedral High School and the New York Foundling Hospital School for Infants’ Nurses. Before entering the Franciscan Sisters on September 8, 1957, she worked at the Foundling Hospital and then in the newborn nursery at Columbia Presbyterian Hospital in New York City. After her profession in 1959, Sister received a BA in Philosophy from Ladycliff College (Cum Laude) an MS in Counseling from Fordham University, and completed the Archdiocesan Training Program in Spiritual Direction and Religious Counseling. Sister taught various grades at Assumption School, Peekskill, and science at the St. Joseph’s branch of Cathedral High School in NYC. She served as Vocation Directress from 1969-1971 and Directress of the Juniorate and then was the Guidance Counsellor for the Catholic Schools in the Peekskill area. In 1973 she began volunteering at Bedford Hills Correctional Facility, where she eventually ministered as the Catholic Chaplain at Bedford Hills, Taconic, and Sing Sing. She was the first woman Catholic Chaplain in Prison Ministry in the state of New York, a ministry which became the heart and soul of her Gospel living. In 1985 she was the initiator of the establishment of the Gift of Love, working with Cardinal O’Connor and Mother Teresa in opening this wonderful hospice for people with AIDS. From 1996-2007 Antonia served on Governor Pataki’s AIDS Council to help bring about changes from all suffering from the disease. After retiring from her Prison Ministry in 2015, Sister served as Provincial Secretary for her Religious Community until two days before her passing. Her wake will be held at Mt. St. Francis, 250 South Street, Peekskill, NY from 2-8pm with a Vesper Service at 6:30pm and her funeral Mass will be on Friday April 28th at 11:15am, followed by burial in the Sisters’ cemetery. Donations in her memory can be made to the Franciscan Missionary Sisters at the above address.

The family of Sr. M. Antonia Maguire FMSC created this Life Tributes page to make it easy to share your memories.

Send flowers to the Maguire family.