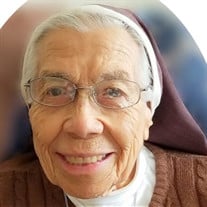 Sister Loretta Guevarra, age 94, a Franciscan Sister of the Atonement from Graymoor, transitioned into God’s glory on Saturday, March 2, 2019 at NY-Presbyterian Hudson Valley Hospital, Cortlandt Manor, New York after a brief illness. Sister Loretta was born in Los Angeles, California on September 11, 1924 to Ramona (Lopez) and Dionisio Guevara. Sister is survived by her sister, Rosemarie O’Brien and her brother, William Guevara, as well as numerous nieces and nephews. Besides her parents, Sister is pre- deceased by her siblings: Mary Fuentes, Lupe Lares, John, Louis, Magdaleno and Raymond Guevara. Sister entered the convent on July 16, 1942. She professed her first vows on June 16, 1944 and her final vows on August 27, 1949. As an Atonement missionary for 75 years, Sister ministered in parish, catechetical and ecumenical ministries. Her first assignment was at St. Cecilia’s Mission in New York City. She began moving West in 1946, ministering to the people in Utah (Dragerton), Oregon (Newport) and California (Bakersfield). Sister was well known for her ecumenical efforts – for creating “unity among all peoples.” Sister was missioned to Jatai, Brazil in 1963 and remained in Brazil (Rio Verde, Goiania and San Paulo) until 1994 when she returned to the States. Sister then ministered in California (San Ardo, San Miguel and San Juan Bautista) until her return home to Graymoor in May 2016. Returning to Graymoor does not mean that Sister retired. In her 90’s, she learned how to use SKYPE on an iPad so that she could continue to participate in a weekly RCIA discussion group in California. Sister was always willing to go that extra mile. And in doing so, she even had an electric scooter to get around the property. At Graymoor, there is a yellow road sign of a “Nun on an electric scooter” that will remain there in her memory. It reminds us to “keep going forward for the Lord” and to keep your zest for life as an Atonement missionary “on the go!” On Wednesday, March 6, 2019, the Reception of the Body prayer service will be held at 4:00 p.m. and the evening prayer/wake service will be at 7:00 p.m. Sister’s funeral Mass will be at 11:00 a.m. on Thursday, March 7, 2019. All services will be held in the Sisters’ Motherhouse chapel at St. Francis Convent, Graymoor, Garrison, New York. Burial will be in the Sisters’ Cemetery. Website: https://www.dorseycarlonefuneralhome.com/

The family of Sr. Loretta Guevarra SA created this Life Tributes page to make it easy to share your memories.

Sister Loretta Guevarra, age 94, a Franciscan Sister of the Atonement...

Send flowers to the Guevarra family.