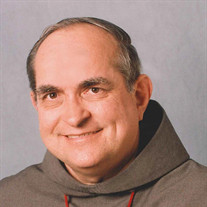 Brother Gregory (nee Joseph George) Lucrezia, SA, May 21, 1942– December 7, 2018, a Franciscan Friar of the Atonement, passed from this life on Friday, December 7, 2018 in Rome, Italy. Bro. Lucrezia was born in Yonkers, NY. He attended parochial school from 1947–1956 at St. Casimir Catholic School in Yonkers and graduated from Cardinal Hayes High School, Bronx, NY in 1960. Bro. Lucrezia entered the Franciscan Friars of the Atonement in September 1960. He made his first profession of vows in 1963 and professed final vows in 1968. Bro. Lucrezia worked in administrative services for the Friars at Graymoor from 1963-1966. From 1966-1967 he attended Nursing School at Phelps Memorial Hospital, Tarrytown, NY and received his Licensed Practical Nurse (LPN) degree. From 1967-1973, Bro. Lucrezia served as Director of the Infirmary at Graymoor and is fondly remembered for his excellent, compassionate care of fellow Friars. He was Director of the Medical Department at St. Christopher’s Inn at Graymoor from 1973-1988. In 1988, he was appointed Executive Director of St. Christopher’s Inn, a position he held until 1993. During his tenure as Executive Director, Bro. Lucrezia supervised a major construction and renovation project at the Inn from 1992-1993. In 1993, he left St. Christopher’s Inn to become Executive Director of the Halfway Houses of Westchester from 1993-1995. From 1995-1997, he worked in the Friars’ Infirmary at Graymoor. He joined the nursing staff of Resurrection Nursing Home in Castleton, NY in 1997 and worked there until 1999. In 1999, Bro. Lucrezia was elected to the Friars’ General Council and also served as Secretary General. He was re-elected in 2004 and served in both positions until 2009. Bro. Lucrezia was a New York State-certified Alcohol and Substance Abuse Counselor from 1970-2000 and also studied Gerontology, Theology, and Spirituality. He received awards for his work with the Homeless and Addicted from the National Association of Religious Brothers (1991) and the Cardinal Hayes Alumni Association (1992). He was awarded the Franciscan Federation’s Franciscan Peacemaker Award at its annual Federation Conference in 2008. In September 2009, Bro. Lucrezia was assigned as Post-novitiate Formation Director for the Friars’ European Formation team based in Rome, Italy. In October 2009, he was appointed Procurator General to the Holy See and retained that title until his death. From 2011-2014, he was given the title of International Postulant Director for Europe, also based in Rome. Bro. Lucrezia was relocated to Assisi in September 2014 to serve as Guardian and Post-Novitiate Formation Director. He was still active in that role at the time of his death. Bro. Lucrezia was the son of the late Joseph Lucrezia of Yonkers, NY and Helen Rozycki Lucrezia. He was predeceased by his sister, Laura Lucrezia. He is survived by a cousin, Lorraine Pasquale of Fishkill, NY. Brother Lucrezia resided at the Friars’ Novitiate in Assisi, Italy at the time of his death. In lieu of flowers, donations to the St. Christopher Inn Scholarship Fund in Bro. Lucrezia’s memory would be gratefully accepted.

The family of Br. Joseph George Lucrezia SA created this Life Tributes page to make it easy to share your memories.

Send flowers to the Lucrezia family.