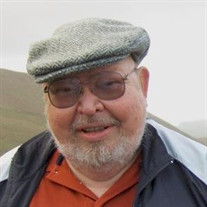 A celebration of life is scheduled for Saturday, Feb. 23, 2019, 11:30 AM, at Holy Spirit Catholic Church in Cortlandt Manor for John L. “Jack” Murphy, who died peacefully on Feb. 14, 2019, at the age of 75. He was of the Catholic Faith. Father Jim Gardiner will officiate. Burial will follow in Assumption Cemetery in Cortlandt Manor. Mr. Murphy was born April 22, 1943, in New Castle, Pa., to John D. and Mary Louise Murphy. He grew up with three younger sisters, spending time in Pennsylvania and Iowa before moving with the family to Albany, N.Y., at age 16. He became a commuter student at Siena College and began a "real" journalism career as a part-time sportswriter for The Times Union in Albany. His first full-time newspaper job was at the New Haven Register, still writing sports. This was followed by a short stint at the Schenectady Union-Star, and then four years on the city desk of Albany Knickerbocker News, where he rose to become the executive city editor. In 1973, Jack was recruited to be the editor of The Evening Star, the Peekskill newspaper founded in 1922. During his 12-year tenure as editor-in-chief, Jack mentored many young journalists who went on to successful careers throughout the state. Active in several professional organizations, Jack was a member of the New York State Society of Newspaper Editors and served a term as president. He also belonged to the Associated Press Managing Editors Association, and the United Press International New York State Advisory Board. He served as editor of the Peekskill Evening Star until 1987, prompting his “escape” from the newspaper industry for the greener pastures of public relations. He retired in 2005 after nearly two decades with the New York Power Authority, where he had been director of public relations. After retirement, he remained in Peekskill and was actively involved in the community. The St. Patrick’s Committee, though, stayed closest to his heart. In the mid-1990s, Jack got involved with a group of men — most notably Dan Caffrey, Joe Brady and Eddie Hayes — who had spearheaded a movement to establish a St. Patrick's Parade in the City of Peekskill. Jack's formal connection with the parade began with his selection as an aide to Grand Marshal Jack Carey in 1996, and he has served as the chairman of this highly successful parade for nearly 20 years. In 2006, he was selected Grand Marshal — an honor he said had no equal. "We don't accept the role of Grand Marshal for ourselves, we do it for our family. And after it’s all said and done, you want to do it all over again!" he said. He served on the boards of the Peekskill-Cortlandt Chamber of Commerce and the Paramount Center for the Arts. He also served two terms as president of the Holy Spirit Parish Council. When the redevelopment of Charles Point was proposed, Jack was asked to serve on Peekskill's Industrial Development Agency. The Power Authority encouraged its staff members to take active roles in the communities in which they lived and where NYPA facilities existed. This led to Jack being part of the team that produced fireworks over the Hudson River each summer — fireworks that continue to the present under the sponsorship of Entergy Nuclear. It also led to being one of the founding members of the annual "Peekskill Celebration.” Jack stayed involved in myriad civic clubs and causes, including the BPOE Lodge 744 and Peekskill Lapolla Little League. He was a life member of the Cortlandt Hook and Ladder Co. No. 1 in Peekskill, and a dedicated volunteer and member of the Shore Line Trolley Museum in East Haven, Conn. In 2010, he was honored as Hibernian of the Year by the Ancient Order of Hibernians in recognition of his work promoting Irish-American culture. One year later, he received the Field Library’s Chester Smith award in recognition of his decades of contributions to the City of Peekskill. Due to health issues, he had recently relocated to Raleigh, N.C., but his heart remained in Peekskill, always longing to return to his reserved seat at The Quiet Man Public House, where he spent many an afternoon with his “gang” of close friends. Jack was a prolific storyteller who could spin a yarn on just about any subject (sometimes more than once). He was preceded in death by his parents John D. and Mary Louise Murphy; his wife Mary Alice; and sister Eileen Harter. He leaves behind to cherish his memory six children, Lori Murphy of Creedmoor, N.C., Brian (Melisa) Murphy of Chattanooga, Tenn., Deidre (Marc) Pannazzo of Middletown, N.J., Sean (Michelle) Murphy of Covington, La., Dominick Pannazzo of Savannah, Ga., and Dan (Amy) Murphy of New Orleans; five grandchildren, Jacob, Rian, Alexis, Erin and Jackson; sisters Barbara Dragon of Colonie, N.Y., and Connie (George) McNally of Delmar, N.Y.; as well as many nieces, nephews and beloved friends. In lieu of flowers, memorial donations may be made to a charity of your choice. Dorsey Carlone Funeral Home of Peekskill is in charge of the arrangements. Online condolences can be left at www.dorseycarlonefuneralhome.com.

The family of John (Jack) Murphy created this Life Tributes page to make it easy to share your memories.

Send flowers to the Murphy family.