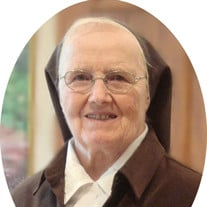 Sister Jean Theresa Beyette, SA, a Franciscan Sister of the Atonement from Graymoor, entered into the Eternal Kingdom of God’s glory on Saturday afternoon, March 26, 2022 in the Motherhouse care unit, Lurana Healthcare Residence. Sister Jean was born in North Bangor, New York on May 20, 1928, the youngest of five children born to Estella (Stone) and Horace Beyette. Predeceased by her parents and siblings: Grace D. Beyette, Leroy Beyette, Rev. Francis J. Beyette and Rev. Paul V. Beyette, Sister is survived by her Sisters in Community and extended family members. Having entered the Community as a postulant on April 20, 1950, she became a novice on October 11, 1950, professed her first vows on October 15, 1951 and her final vows on October 15, 1957. As an Atonement missionary for 71 years, Sister served in parish, catechetical, pastoral and spiritual ministries in the following assignments: New Jersey (So. Plainfield & Deal), Massachusetts (Boston), New York (St. Cecilia’s NYC, Glens Falls, Rocky Point, Plattsburgh, Graymoor), Utah (Copperton) and Vermont (Burlington). Sister was known for her many years of ministry “among the people” as she tirelessly gave all for the ‘Glory of God.’ She taught the Faith to many adults and children as she directed and taught in religious education programs throughout the North Country. From 1984 to 2007, Sister ministered at Our Lady of the Adirondacks House of Prayer in Ellenburg Center, NY, where she also became the director. There, she helped many through offering quietude and time to reflect on the direction of their lives. When asked, “What does the director of a house of prayer do?” Sister replied, “A little of everything,” as she also pitched in to help in the food pantry and the clothing outlet. Her attitude was one centered on God as a Father with open arms stating, “The person God sends to our door comes first.” Sister returned to the Motherhouse at Graymoor in 2007 where she ministered in various on-site activities. She drove Sisters to appointments, ministered in the adult daycare at Mother Lurana House, helped Sisters in the infirmary, and was more recently known as the Sister who would repair a wristwatch or hem a skirt for a Sister. Quiet and seemingly, in the background as she ministered, Sister Jean touched many lives ~ both outside and inside the convent. You will be missed, Jean. Thank you for all you have done for everyone. Due to the Coronavirus pandemic, services were private for the Atonement Community (Sisters & Friars) and family. The Reception of the Body prayer service was held on Wednesday, March 30, 2022, as well as the Evening Prayer/Wake Service. Sister Jean’s funeral Mass was on the morning of Thursday, March 31, 2022. All services were held in the Motherhouse convent chapel at Graymoor. Burial was in the Sisters’ cemetery. Funeral arrangements by Dorsey-Carlone Funeral Home, Peekskill, NY. In lieu of flowers, donations may be sent to: Franciscan Sisters of the Atonement, 41 Old Highland Tpke. Garrison, NY 10524

In Sister's memory a donation to the Franciscan Sisters of the Atonement is greatly appreciated.