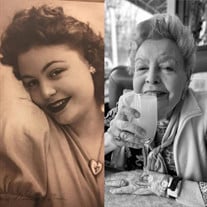 Jacqueline P. (nee Lieutaud) Baggini, was lifted to heaven on January 11, 2021. Jacqueline was born in Paris, France, in 1922 where years later she met the love of her life, Captain John Anthony Baggini during World War II. In a true romance story, they first met, and fell in love at an American Red Cross dance. Though John wanted her to come to the U.S. and marry right away, in her independent manner, Jacqueline wanted to take things one step at a time. Two years later, in 1947, they were married. Together they raised a family of five children: Daniel, Patricia, Marianne, Oros, Christine and Christopher. During the years of raising her children in Flushing, Queens, Jacqueline held multiple volunteer positions at St. Andrew Avellino Church. Once her children were raised, Jacqueline worked at Astoria Federal Savings Bank. In 1986, Jacqueline and John moved to Valhalla in Westchester County, where she continued to work for Astoria Federal. In 1998, Jacqueline started to work at Westchester Medical Center, where for 20 years she was employed as a Patient Representative and Notary, helping patients understand their rights, ensuring they completed their health care proxies and comforting them in difficult times. Jacqueline also served as a Eucharist Minister at Holy Rosary Church in Hawthorne, until 2018 when she moved to Atria on the Hudson in Ossining. Jacqueline was pre-deceased by death of her husband John on January 12, 2003 and their first-born son Jean Michel in 1949. Jacqueline dearly loved her large family and is survived by her five children, 10 grandchildren and 4 great-grandchildren: Daniel Baggini (Lynn) of Mahwah, NJ and their children, Danielle Nichols (Michael) and John; Patricia Rolston (Bernard) of Manhasset, NY, and their children, Timothy (Jenny) and their children, Peter and Matthew; Michael (Elizabeth) and their children, Rebecca and Jeremy; James (Kaitlyn); Marianne Oros (George) of Cortlandt Manor and their children John (Jessica), and Christina; Christine Baggini (Dee Couvelha) of Richmond VA, and son, Taylor Williams; and Christopher (Jennifer) of Radnor, PA and their children, Abbigail, Elizabeth, and Julia. Jacqueline also has her dear goddaughter and niece, Dominique Six and family, living in Paris, France. Wake hours are on Friday, January 15th from 4pm-6pm (service at 5:30 PM) at the Dorsey -Carlone Funeral Home at 1100 Cortlandt Street, Peekskill. Catholic Mass is at 10 am on Saturday at Holy Rosary Church, 170 Bradhurst Avenue, Hawthorne, NY 10532, and burial at the Gate of Heaven cemetery following the Mass.

Jacqueline P. (nee Lieutaud) Baggini, was lifted to heaven on January 11, 2021. Jacqueline was born in Paris, France, in 1922 where years later she met the love of her life, Captain John Anthony Baggini during World War II. In a true romance... View Obituary & Service Information

The family of Jacqueline P. Baggini created this Life Tributes page to make it easy to share your memories.

Jacqueline P. (nee Lieutaud) Baggini, was lifted to heaven on...

Send flowers to the Baggini family.