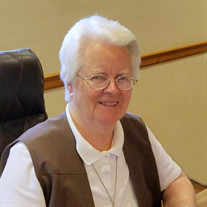 Sister Jacinta (Mary Bridget) Mullin, a Franciscan Sister of the Atonement at Graymoor, entered into God’s glory early Friday morning, September 17, 2021 after an unexpected health episode on the previous afternoon ~ four days shy of her 90th birthday. Born in Drumanybeirne, Co. Leitrim, Ireland on September 21, 1931, Sister was one of five children born to Margaret (Kiernan) and Patrick Mullin. Predeceased by her parents and three siblings: Francis, Patrick and Sister Margaret (an Atonement Sister), Sister Jacinta is survived by her brother, John, of England, as well as numerous nieces and nephews. Having entered the Community in Ireland on May 15, 1947, Sister later traveled to New York at the age of 16 and entered the Postulancy on April 24, 1948. She became a Novice on September 29, 1948 and received the name Sister Jacinta. Sister professed her first vows on October 1, 1949 and her perpetual vows on August 27, 1955. As an Atonement missionary for 72 years, Sister Jacinta had ministered in parish and catechetical ministries in her earlier years. The parishes where she served include: California (Merced, Placerville and Arroyo Grande), Utah (Dragerton) and New York State (Brushton, St. Cecilia’s in NYC, Mechanicville and Cadyville). Sister returned to Graymoor in 1972 and for 40 years, she supervised all the maintenance needs of St. Francis Convent (the Motherhouse) and Graymoor properties owned by the Franciscan Sisters of the Atonement, retiring from that position in August 2013. In a request to the Sisters to name a few attributes of Sister Jacinta, their responses included: Sister Jacinta was … a kind woman ... a person who accepted her life’s challenges … a faithful woman of prayer … my very dear friend … a most generous person, especially with her time … she always took the time to take me shopping or anywhere else I wanted to go … a gentle soul … I never heard her complain or speak ill of others. Memories of Sister Jacinta reiterate the fact that she was a “Sister who was always there for the other Sisters.” Much like a candle gives its’ light away to others, so too, Sister Jacinta gave of herself and was always willing to help. There is not a hallway or a room in the convent where we do not see your ‘presence’ ~ you there with your tools and ‘fix-it’ ideas at hand! Sister Jacinta, you are truly missed by everyone! Due to the Coronavirus pandemic, services were private for the Atonement Community (Sisters & Friars) and immediate family members only. A private Reception of the Body prayer service was held on September 21, 2021, as well as the Evening Prayer/Wake Service. Sister Jacinta’s funeral Mass was on the morning of September 22, 2021. All services were held in the Motherhouse chapel at Graymoor. Burial will be in the Sisters’ cemetery. Funeral arrangements are by Dorsey-Carlone Funeral Home, Peekskill, NY. In lieu of flowers, donations may be sent to: Franciscan Sisters of the Atonement, 41 Old Highland Turnpike, Garrison, New York 10524 (USA).

The family of Sr. Jacinta Mullin SA created this Life Tributes page to make it easy to share your memories.