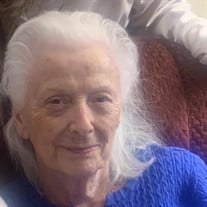 M. Georgiana Woodward, of Peekskill, NY, died peacefully in her home on April 20, 2022 surrounded by all of her children. Georgie was born in Hackensack, NJ on September 1, 1934. At seven years of age, she was adopted by her first grade teacher, Marion (Charles) Freier. She grew up in Clifton, NJ and attended Passaic Collegiate School graduating in 1952. In September of 1952, Georgie married the love of her life, David C. “Coach” Woodward, who preceded her in death in 2007. They purchased their Peekskill home on Overlook Avenue in 1956 and went on to happily share 55 years of marriage and raise their six children. Georgie loved caring for her home and family. She was a GREAT mom and ran a ‘tight ship’ which was fine with her kids. We wanted for nothing. As a proficient piano player, she would often play as the family sang (or not, which was sometimes better). The best was her rendition of “Down Yonder” when she made the piano jump while hammering those octaves. The Overlook home and backyard was a place of many good times, wonderful memories and loud laughter. Family was everything to Georgie. She is survived by her children Charlotte Woodward, Matthew Woodward, Marion (Paul) Dorsey, Doug (Lisa Cesarini) Woodward, Cindy (Dave) Herritt and Sara (Jay) Sellick. She was a proud grandmother and loved her many grandchildren: KeriEllen (Alex Bird) Dorsey, Gene (Macy) Baca, Christine (Kelly) Sand, Elisabeth (Chris) DeDato, Nicole Woodward, Shannon (Marco Cortes) Dorsey, Heather (Brendan) Flynn, Meghan (Joe) Ocana, Katharine (Joe) DeCicco, Mollie (John) Canzona, Josh Herritt, Hudson (Ashley) Woodward, Tim (Christine) Dorsey, Chelsea Herritt, Leah Woodward, Jeremiah Dorsey, Melissa Cesarini, Luke Herritt, Faith Cesarini, John Nault, Jane Woodward, and her frequent canine visitor, Darla. Georgie is also survived by her precious great grandchildren: Sofia, Elias, Christopher, Madison, Kennedy, Scarlet, Amaya, Declan, Isabella, Kaylie, Greyson, Bonnie, Lucy, Isla, Clara. For those of you who might wonder what the first initial “M” stands for in her name….it’s Margaret. But in the hearts of her children it stands for MOM. She will be forever loved and missed. In her memory, the family would ask that you feed the birds. Georgie would love that! A private service will be held in the coming week.

M. Georgiana Woodward, of Peekskill, NY, died peacefully in her home on April 20, 2022 surrounded by all of her children. Georgie was born in Hackensack, NJ on September 1, 1934. At seven years of age, she was adopted by her first grade teacher,... View Obituary & Service Information

Private services are being held for Mrs. Woodward. Please share your memories here for the family to read.

M. Georgiana Woodward, of Peekskill, NY, died peacefully in her...

Send flowers to the Woodward family.