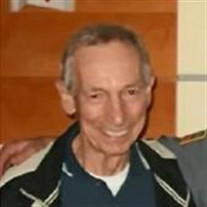 Not sure what to send?

Frank Sabito of Poughquag, formerly of Peekskill and Putnam Valley, died on Sunday December 6, 2020, he was 85 years old. Frank was born and raised in Peekskill, the son of Andrew and Elizabeth Springstead Sabito. He attended Assumption School and graduated from Peekskill High School. Frank was a veteran of the United States Air Force where he served from 1953 until 1957. While in the Air Force he attained the rank of Staff Sargent and toured Europe during the time he was on active duty. Frank received an honorable discharge at which time he began his career working for a local appliance repair company in Peekskill. In 1971, he went to work for Curtis Instruments serving as a quality control inspector. After he “retired” from Curtis Instruments in 2001, he was asked to return to lead a division recalibrating instruments that had been developed in the overseas manufacturing operations at Curtis. Frank was well known in Westchester County for his love of jogging; competing in numerous running races ranging in distances from 3K to full 26.2 mile marathons. Over the course of his life Frank ran in over 60 marathons, with his crowning achievement being the first American finisher in his age group in the NYC Marathon in 1987 with a time of 2 hours and 52 minutes. Frank was also an avid amateur astronomer. He loved using his telescope to identify stars, comets, planets and other celestial objects. Frank could often be found on his deck in the evening focusing in on whatever was shining in the sky. If he wasn't jogging or identifying stars, Frank also enjoyed skiing and ice skating. Most winters found Frank and Phyllis downhill and cross-country skiing in Lake Placid or the Adirondacks; or ice skating at the many indoor and outdoor skating rinks in their area such as Bear Mountain. Later in life, Frank enjoyed spending time at home reading; and visits from his step-great grandchildren, step-grandchildren and step-children. At home is where “mema and Papa Frank” would enjoy planning clambakes, and holiday gatherings. Birthdays, weddings, and the birth of additions to the family were always a cause for celebration. Frank is survived by his loving wife, Phyllis Angell Sabito, and was predeceased by his siblings, Daniel, Andrew, Elizabeth, Marie, and Geraldine. His step-children, Linda DeFeo Cascioli (Kenneth) of Putnam Valley, Andrew DeFeo (Karen Teale) of Altamont, Laurie DeFeo of Dover Plains, Douglas DeFeo (Elizabeth) of East Moriches, six step-grandchildren Kenneth Cascioli (Laura), Kristin DeFeo Northrup, Andrea DeFeo Barcomb (Greg), Chelsea Simunek, Nicholas Casioli, and Anthony DeFeo; and three step-great grandchildren Joseph Steeprock, Jordan Northrup, and Carson Barcomb. Cremation was private and when family and friends can safely come together a memorial service will be held to celebrate Frank’s life. Arrangements by Dorsey – Carlone Funeral Home, Peekskill, NY.

Frank Sabito of Poughquag, formerly of Peekskill and Putnam Valley, died on Sunday December 6, 2020, he was 85 years old. Frank was born and raised in Peekskill, the son of Andrew and Elizabeth Springstead Sabito. He attended Assumption School... View Obituary & Service Information

The family of Frank Sabito created this Life Tributes page to make it easy to share your memories.

Frank Sabito of Poughquag, formerly of Peekskill and Putnam Valley,...