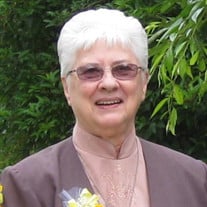 Sister Edward Marie Tesiero (Edwina Mary), age 85, a Franciscan Sister of the Atonement from Graymoor, peacefully transitioned into God’s glory on Sunday morning, July 25, 2021 in the Lurana Healthcare Residence of St. Francis Convent, Graymoor, Garrison, New York. Sister Edward Marie was born in Amsterdam, NY on October 15, 1935 to Sarah (Boyd) and Edward Tesiero. Predeceased by her parents and sister, Marilyn Sickler, she is survived by her Sisters in Community, her brother Edward Tesiero of Amsterdam, NY and several nieces and nephews. Edwina Mary entered the Community on September 8, 1959. She received the name Sister Edward Marie on May 5, 1960 when she became a Novice. She professed her first vows on May 15, 1961 and her final vows on August 27, 1966. As an Atonement missionary for 60 years, she served in parish, catechetical, pastoral and educational ministries throughout her years as a Sister. Her first mission assignment was in 1962 at Mt. Carmel, CT. From there, she ministered in Maine (Limerick), California (Merced, Bakersfield), Oregon (Bandon), New York (Albany, Graymoor, Canajoharie, Amsterdam, Schuylerville, Massena & Morristown), New Hampshire (North Conway), and a 3-month stay in Bethlehem, So. Africa. From 1991-1996, Sister served on the Leadership Team of the congregation and from 2001-2006 she was the appointed Secretary General. She returned to Graymoor in January 2018. The year before she entered the community, 1958, Edwina received a bachelor’s degree from the College of St. Rose, Albany, NY. In 1970, she studied Theology for one year at Regina Mundi in Rome, Italy and in 1971 began studies at St. Louis University, Missouri where she received an MA in Theology in 1973. From 1975 to 1980, Sister Edward Marie was the Directress of Higher Studies for the junior Sisters of the congregation. Sister Edward Marie was well known as a catechist and director of religious education in the numerous parishes in which she ministered. Sister once wrote, “My finest and most treasured memories are moments when, as a catechist, I observed surprise and joy come over a child’s (or teen’s or adult’s) face as he or she ‘caught’ and recognized the truth of God’s Presence as real, and in them, and with them in their personal life.” Due to the Coronavirus pandemic, services are private for the Atonement Community and immediate family members only. On Friday, July 30, 2021, the Reception of the Body service was held at 4:00 p.m. and the Evening Prayer/Wake Service was at 7:00 p.m. Sister’s funeral Mass was on Saturday, July 31, 2021 at 11:00 a.m. All services were held in the Motherhouse convent chapel at Graymoor. Interment in the Sisters’ cemetery. In lieu of flowers, donations may be sent to: Franciscan Sisters of the Atonement, 41 Old Highland Turnpike, Garrison, New York 10524 (USA). Funeral arrangements by Dorsey-Carlone Funeral Home of Peekskill, New York.

The family of Sr. Edward Marie Tesiero, SA created this Life Tributes page to make it easy to share your memories.