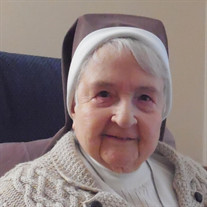 Sister Edmund (Jane Mary) McGourty, age 99, a Franciscan Sister of the Atonement from Graymoor, died on Wednesday, July 26, 2017, in Lurana Health Care Residence at St. Francis Convent, Garrison, NY. Sister Edmund McGourty was born in Cornamukla South, Ballanaglera, Co. Leitrim, Ireland on February 19, 1918 to Margaret (Lynch) and Michael McGourty. Predeceased by her parents and siblings: John, Patrick, Charles, Michael and Mary (McGourty) Rynn, she is survived by her Sisters in Community, and her nieces and nephews. Entering the Community on March 25, 1938, Sister professed her first vows on October 30, 1940 and her final vows on August 24, 1946. As an Atonement missionary, she served in: parish, catechetical and pastoral ministries in: New Jersey (Williamstown & Deal); Michigan (Milford); Vermont (Burlington) and in New York (St. Cecilias, NYC, Potsdam, Lake Placid, Brushton, Elmira, Port Leyden, Canajoharie, Schuylerville, Mother Lurana Home at Graymoor and St. Elizabeth Ann Seton Parish in Shrub Oak) before returning to Graymoor in 2012. Sister Edmund never retired as she continued her ministry of prayer and presence with those who visited her from the local parishes where she ministered, as well as keeping up with “phone ministry” and calling the homebound and sick. On Sunday, July 30, 2017, the Reception of the Body prayer service will be held at 4:00 p.m. in the Motherhouse Chapel and the Evening Prayer/Wake Service will be at 7:00 p.m. Sister’s funeral Mass will be in the Motherhouse Chapel on Monday, July 31, 2017, at 11:00 a.m. Burial will be in the Sisters’ Cemetery at Graymoor. In lieu of flowers, Sister has requested that donations be made to the Franciscan Sisters of the Atonement, 41 Old Highland Turnpike, Garrison, NY 10524. Funeral arrangements by Dorsey-Carlone Funeral Home.

The family of Sr. Edmund McGourty SA created this Life Tributes page to make it easy to share your memories.

Send flowers to the McGourty family.