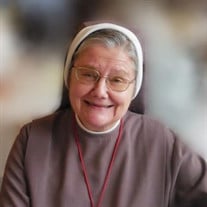 Sister Dr. Lorelei Francis Fuchs, age 70, a Franciscan Sister of the Atonement from Graymoor, transitioned into God’s glory during the evening of Thursday, June 17, 2021 in the Lurana Healthcare Residence at St. Francis Convent, just three days shy of her 71st birthday. Lorelei Lorraine was born to Frederick and Irene (Heitmeyer) Fuchs in Long Island City, New York on June 20, 1950. Besides her Sisters in Community, Sister Lorelei is survived by her sister, Elaine Spinelli of New York, and her nieces and nephews. She is pre-deceased by her parents and her sister, Linda Fuchs. Lorelei, at age 25, entered the Franciscan Sisters of the Atonement on November 1, 1975. She became a novice on September 8, 1976 and received the name Sister Lorelei Francis. Sister professed her first vows on May 20, 1978 and her final vows on August 11, 1984. As an Atonement missionary for 43 years, Sister Lorelei was best known for her work after 1989 in the field of ecumenism. Sister received a Master of Arts in Theology in 1991 from University of Notre Dame, Indiana, then, a Master of Arts in Theology (MTh) and a Licentiate in Sacred Theology (STL) from Katholieke Universiteit Leuven in Louvain, Belgium, where she also received her Doctorate degree in Sacred Theology (PhD) in 2003. Her dissertation was entitled: Koinonia and the Quest for an Ecumenical Ecclesiology: From Foundations through Dialogue to Symbolic competence for Communionality. In her early years in religious life (1978-1985), Sister ministered in various parish assignments as a faith Formator, teacher of religious education, liturgical coordinator and involved in all aspects of parish ministry. She was gifted in music, singing and played the guitar. In 1985, she was missioned to Rome, Italy to minister at Foyer Unitas, an ecumenical guest house of hospitality. Sister was quick to learn languages and became quite fluent in Italian, French and some German. She remained in Italy into 1987, ministering at the community’s international guest house in Assisi, 1986-87 and in 2016. After this, she studied at the University of Notre Dame in Indiana and received a Master of Arts in Theology in 1991. Her journey in the field of ecumenism brought her to New York City in 1991 where she worked at the Graymoor Ecumenical Institute (G.E.I.) as an associate director within the Institute. In 1993, it became the G.E.I.I. (Graymoor Ecumenical & Interreligious Institute). She remained with the Institute until 2006. As an Associate Director of the Institute, Sister served on the National Council of Churches Faith and Order Commission, was an associate editor of Ecumenical Trends, and from 1993-2003 was editor of the GEII resource materials for the annual Week of Prayer for Christian Unity. She also staffed the Institute’s LARC Desk (Lutheran-Anglican-Roman Catholic relations). She wrote numerous articles and gave presentations throughout the United States and also at the Centro Pro Unione in Rome. Sister’s ministries were academic, theological and ecumenical. She traveled throughout the United States, and Europe, especially Italy, France and Germany participating in conferences, dialogues, and giving lectures. She also facilitated ecumenical retreats and parish missions. In October 2015, Sister Lorelei presented a conference on ecumenism at the Sisters’ mission in Paliparan, Cavite, Philippines. Though Sister’s health began to decline in 2016, she was able to continue ministering in hospitality at St. Francis Convent (Motherhouse) at Graymoor, and in 2016/2017 at the Washington Retreat House in Washington, DC, owned by the community. She returned to the Motherhouse in 2018 where she retired and was cared for at the Lurana Healthcare Residence at the Motherhouse. Due to the Coronavirus pandemic, services are private for the Atonement Community and immediate family members only. In lieu of flowers, donations may be sent to: Franciscan Sisters of the Atonement, 41 Old Highland Turnpike, Garrison, New York 10524 (USA). Arrangements by Dorsey - Carlone Funeral Home, Peekskill, NY.

The family of Sister Dr. Lorelei F. Fuchs SA created this Life Tributes page to make it easy to share your memories.