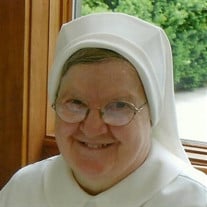 Sister Denis Marie Koi (Viola “Violet” Elizabeth), age 80, a Franciscan Sister of the Atonement from Graymoor, transitioned unexpectedly into God’s glory on Friday evening, January 3, 2020 at St. Francis Convent, Graymoor, Garrison, New York. Sister Denis Marie was born in Kipling, Saskatchewan, Canada on August 6, 1939 to Ida (Vargo) and George Koi who had eight children together. Sister’s parents were from Hungary and moved to western Canada. Unfortunately for the children, their mother, Ida, contracted TB and died when the children were young. The father, George, could not care for his eight children and placed them in residential care in western Canada. Eventually, several of the children were adopted out; but later in their lives, they ‘found’ each other and remained connected. The two youngest boys (Charles and George) were also adopted, but to this day their whereabouts is unknown. Pre-deceased by her parents and two sisters, Elvera Moore and Elsie Sywolos, Sister Denis Marie is survived by three siblings, Ida Martel, Dennis and William Koi, and several nieces and nephews. The whereabouts of Sister’s younger brothers, Charles and George, or whether they are living or deceased is unknown. Sister Denis Marie is also survived by her Sisters in her religious community, including her best friend of 47 years, Sister Ann Joseph Zajan, who frequently plays the flute at Masses in the Motherhouse chapel. Having entered the Atonement Community as a Postulant on September 8, 1960, Sister Denis Marie professed her first vows on May 15, 1962 and her final vows on August 24, 1968. As a Sister in the Community, Sister Denis Marie served in pastoral and healthcare units caring for elderly laypersons or infirm Sisters. Sister Denis Marie was a caring, kind and sensitive person. On May 1, 1959, Sister received her LPN degree from the University of Alberta. Years later, she moved from Edmonton to Graymoor and in 1968, obtained her New York State LPN License. Sister has remained in some form of nursing care since her arrival at Graymoor in 1967, 52 years ago. Sister’s ministries included: Edmonton, Alberta, Canada (1963 to 1967) where she ministered to children in residential care. In 1967, after moving to Graymoor (Garrison, New York), Sister began working towards her NY State LPN license, and ministered with seniors and Sisters living at the Mother Lurana Home. After six years there and having obtained her LPN license, Sister moved to the Motherhouse and began ministering in full-time nursing care in the Sisters’ infirmary. Over the past years, though retired from direct nursing care, she has continued to be a helpful and aiding presence as a Sister/support staff to those working in the healthcare residence, as well as to those Sisters who are ill and in need of care. Sister Denis Marie was one of those foundational persons who was “always there” when you needed her. She was quiet, soft-spoken and very kind and helped more people than we shall ever really know. Need something? Just ask Sr. Denis Marie – and don’t stop now! She will intercede for you from Heaven! Keep on asking and she will surely keep on giving! That’s just the way she is! Services at St. Francis Convent, Graymoor, will begin on Tuesday, January 7, 2020. The Reception of the Body service will be at 4:00 p.m. in the Convent chapel, and the evening prayer/wake service will be at 7:00 p.m. The next morning, Sister’s funeral Mass will be in the Convent chapel at 11:00 a.m. on Wednesday, January 8, 2020. Burial will be in the Sisters’ Cemetery at Graymoor. Funeral arrangements by Dorsey-Carlone Funeral Home.

The family of Sr. Denis Marie Koi SA created this Life Tributes page to make it easy to share your memories.

Send flowers to the Koi family.