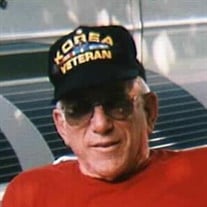 David James Ferris, 84, passed away on Aug. 30, 2016 at the VA Castle Point Veteran’s Village community living center. He was born to Gilbert and Katherine on Dec. 14, 1931 in Peekskill NY, and married Joyce M. Lawrence on Aug. 3, 1951 at the Assumption Church. He is survived by his children Jane (Gary) Heinrich of New Paltz; Jay (Cindy) Ferris of Wappingers Falls; Margaret (Wayne) Michael of New Paltz; sister Cheryl O’Dell of Milford, PA; grandchildren Jennifer (Glenn) Androvett, Lindee Helander, Kristin Ferris, David Philip Ferris; and great-grandchildren Tyler, Casey, Anthony, Teagan, and Sophia. He was predeceased by his wife, son Michael, and brother-in-law Kenny O’Dell. He proudly enlisted in the Army to serve during the Korean War (936th Armored Field Artillery BN (155mm) HQ and HQ BTRR, Dec. 1951 – Aug. 1952). Raising his family in Verplanck NY, he worked as a master HVAC engineer for firms of his own and others. He continued his service to our country as a 14-year volunteer at VA Castle Point. He was a life member of DAV Chapter VA Castle Point 144, and Mended Hearts. Calling hours will be at Dorsey-Carlone Funeral Home, 1100 Cortlandt Street, Peekskill, NY (914) 737-0848 on Fri. Sept. 2 from 2-4pm and 7-9pm. A funeral mass will be held at Assumption Church on Sat. Sept. 3 at 10am, interment following at Assumption Cemetery. In lieu of flowers, donations can be made to The Wounded Warrior Project.

The family of David J. Ferris created this Life Tributes page to make it easy to share your memories.

Send flowers to the Ferris family.