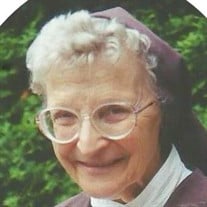 Sister Barbara Ohl, 90, a Franciscan Sister of the Atonement from Graymoor, died on Sunday, April 26, 2015 at Lurana Health Care Residence of Saint Francis Convent, Graymoor, Garrison, NY. Sister Barbara was born in Endicott, New York on April 9, 1925 to Letha Euphemia (Edwards) and Maurice J. Ohl. Sister is predeceased by her sister, Mary Jane Erway, and is survived by her nephew, Grover “Bud” Erway. Sister entered the convent on September 8, 1954. She professed her first vows on May 21, 1956 and her final vows on September 2, 1961. As an Atonement missionary, Sister served in parish, catechetical and pastoral ministries in Schenectady and Garrison, NY; Burlington, VT; Placerville and Oildale, CA; and Byram, CT, before returning to the Motherhouse at Graymoor in 2005. From June 1976 to June 1986, Sister served two terms as a council member in Community Administration. On Wednesday, April 29, 2015, the Reception of the Body prayer service will be held at 4:00 p.m. and the Evening Prayer/Wake Service will be at 7:00 p.m. Sister’s funeral Mass will be held on Thursday, April 30, 2015 at 11:00 a.m. Services are held in the Motherhouse chapel, St. Francis Convent, Graymoor. Burial will be in the Sisters’ Cemetery.

The family of Sr. Barbara Ohl S.A created this Life Tributes page to make it easy to share your memories.

Sister Barbara Ohl, 90, a Franciscan Sister of the Atonement...

Send flowers to the Ohl family.