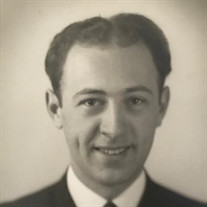 Anthony J. Ferraro, JSC, a lifetime Peekskill resident died on May 13, 2018 at the age of 101. Anthony was born on the outskirts of Peekskill on January 27, 1917, son of Virginio and Rose Ferraro. He graduated from Peekskill H.S, Fordham University, and Fordham University School of Law by the age of 21. Anthony was admitted to practice law in NYS in 1941. He served his clerkship in the Law Offices of James Dempsey. Anthony was employed by the Royal Globe and Eagle Insurance Companies. He opened his own law office in Peekskill in Peekskill in 1941. By 1974 it had expanded to Ferraro, Lombardi and De Caro. As a trial attorney, he recovered million dollar verdicts for his injured clients. When he opened his law office he also worked as a Professor of Law and Calculus at Iona College. Later, while still running his own office, he was the Law Clerk to Supreme Court Judge James Bailey. He served as the President of the Peekskill Bar Association. He was the Vice Chairman of the Fordham Alumni Association, a member of the Board of Directors of Peekskill Community Hospital and the Board of Directors of the Cerebral Palsy Association. Anthony was elected to the NYS Supreme Court in the 9th Judicial District in November 1974. He sat on that Court from 1975 – 1988. As a Supreme Court Justice, over fifty of his decisions were published in the NY Law books. On July 13, 1946, he married the love of his life, Elvera Kantner. Together they raised four daughters. He is survived today by three daughters, Dianne (Ken) Auser, Bev (Mark) Banta, and Gail Ferraro, six grandchildren and five great grandchildren, his sister Louise Uberbacher and brother John Ferraro. Anthony is predeceased by his wife Elvera, daughter Carole, grandson David and sister Carmela Cote. A mass of Christian burial will be held Thursday May 24 at 11:30 AM, Assumption Church Peekskill, followed by interment at Assumption Cemetery. Visiting at Dorsey – Carlone Funeral Home 1100 Cortlandt St. Peekskill on Wednesday 3 – 7 PM. In lieu of flowers donations in Anthony’s name may be made to Fordham University School of Law.

Anthony J. Ferraro, JSC, a lifetime Peekskill resident died on May 13, 2018 at the age of 101. Anthony was born on the outskirts of Peekskill on January 27, 1917, son of Virginio and Rose Ferraro. He graduated from Peekskill H.S, Fordham University,... View Obituary & Service Information

The family of Anthony J Ferraro created this Life Tributes page to make it easy to share your memories.

Send flowers to the Ferraro family.