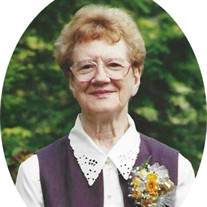 Sister Ann Kathleen (Mary Bridget) Clancy, a Franciscan Sister of the Atonement, entered into the Kingdom of God’s glory on Thursday, June 17, 2021 at the Lurana Healthcare Residence of St. Francis Convent at Graymoor in Garrison, New York. She was 96 years of age. Sister Ann Kathleen was born on February 23, 1925 in Ballinagleragh, Co. Leitrim, Ireland. Survived by her Sisters in Community, nieces, nephews and cousins, Sister is pre-deceased by her parents, Kate (Gilmartin) and John Clancy, and her three brothers: James, Stephen and Dermot. Mary Bridget, at the age of 22, entered the Franciscan Sisters of the Atonement in Rossinver, Ireland on June 7, 1947 and became a postulant. After a time there, she and seven other postulants sailed from Ireland to New York and Sister recalled the warm welcome they received upon arriving at Graymoor after the long boat trip. The homesickness and the sense of being ‘in a far-away land’ did not last long after they experienced the love and warmth of the greeting by Sister Mary Celine, the Directress of Postulants at that time. This feeling of welcome has meant a great deal to her over the years and Sister Ann Kathleen, herself, was always a very welcoming person. On September 28, 1948, Sister became a Novice at Graymoor. She professed her First Vows on October 1, 1949 and her Perpetual Vows on August 27, 1955. As an Atonement missionary for 72 years, Sister Ann Kathleen served in various parishes within the United States primarily as a parish minister, teaching the faith through religious education class, pastoral care of the sick and homebound, and reaching out to those in need. Early in her religious life, Sister ministered for three years in the Community’s retreat ministry at the Washington Retreat House, Washington, DC. Other responsibilities included years of parish ministry in the following parishes: Connecticut (Mt. Carmel), Michigan (Milford), New Jersey (Camden), New York (Ticonderoga, Port Leyden & Brushton), Oregon (Bandon & Lakeview), and Rhode Island (Harrisville). Sister was an energetic, versatile and caring person. Sisters who knew Sr. Ann Kathleen saw her as a friend whose love and sensitivity enriched their lives. They admired her generosity as she gave of herself in the service of her Sisters. She had a hearty laugh and enjoyed good times in the company of her friends and family. She enjoyed being with cheerful people, enjoyed music, art, sports, and especially hockey! In the early 90’s, Sister’s caring heart led her to minister for four years with those suffering from the effects of AIDS at Yale, New Haven. Shortly after this ministry, she returned to the Motherhouse at Graymoor where she was a driver to take Sisters to appointments and also ministered in our Sisters’ Gift Shop for a number of years. As her health began to decline in 2018, Sister became a resident in the Lurana Healthcare Residence where she resided until her death. Due to the Coronavirus pandemic, services will be private for the Community only. Burial will be in the Sisters’ cemetery. In lieu of flowers, donations may be sent to: Franciscan Sisters of the Atonement, 41 Old Highland Turnpike, Garrison, New York 10524 (USA). Funeral arrangements are by Dorsey-Carlone Funeral Home, Peekskill, NY.

Sister Ann Kathleen (Mary Bridget) Clancy, a Franciscan Sister of the Atonement, entered into the Kingdom of God&#8217;s glory on Thursday, June 17, 2021 at the Lurana Healthcare Residence of St. Francis Convent at Graymoor in Garrison, New... View Obituary & Service Information

The family of Sr. Ann Kathleen Clancy SA created this Life Tributes page to make it easy to share your memories.