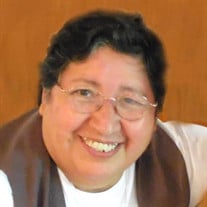 Sister Ana Maria (Maruja) Causa, a Franciscan Sister of the Atonement missioned at St. John Bosco Parish in Port Chester, NY, transitioned into God’s glory on Sunday evening, December 6, 2020 at Greenwich Hospital, Greenwich, CT. Born in Moquegua, Peru on April 17, 1952, Sister Maruja is pre-deceased by her mother, Sabina Causa Gutierrez and two brothers, Francisco and Gilberto. Besides her Sisters in Community, Maruja is survived by family in Peru, Joel David Flores, his children and her two brothers, Augosto and Alfonso, as well as many nieces and nephews. Having entered the Community on September 8, 1999, Sister Maruja shared the motive of her vocation, “I always liked helping those in need. Now that I’ve been to your Community, I sense that I can fit in and I think that I can benefit from your Community, as much as I hope I can help you. I saw the different ministries that you’re doing and I profoundly feel a calling toward this kind of life ~ the Unity and At-one-ment, the spirituality of Saint Francis, and in other words, I love the Franciscan Sisters of the Atonement. I am disposed to do whatever ministries that you would like me to do.” Maruja became a Novice on August 12, 2000, professed her first vows on August 10, 2002, and her final vows on August 8, 2009. As an Atonement missionary, Maruja was involved in Hispanic ministry in both Boston (2002-2005) at St. John Baptist Parish in Peabody, MA, and in Byram, CT (2005-2007). Her assignment before final profession was at the Washington Retreat House in Washington, DC (2007-2010); she then returned to parish ministry in September 2010, living at the convent in Byram, CT and serving at Holy Rosary, Port Chester, NY. At the time of her death, Sister Maruja was the Pastoral Associate at St. John Bosco Parish in Port Chester. She was well-loved by the parishioners and those with whom she worked with each day. There are some people in life who are like “candles” ~ always giving away to others the light from within themselves. Sister Maruja was that kind of person. Sr. Maruja, native to Peru, obtained her US Citizenship in April 2010. In her ministries, she was an avid promoter of vocations to the Religious Life and in October 2012 she was appointed as one of four team members on the Community’s Vocation Promotion Team; Sr. Maruja continued on the team until the time of her death. Along with the other Community Team members, Sr. Maruja was also a member of the National Religious Vocation Conference (NRVC) and participated in Region 2 of the Hudson Valley. In April 2015, Sr. Maruja received recognition from NY State Assemblyman, Steven Otis, as “an outstanding citizen who is worthy of our esteem and the esteem of the great State of New York.” In her legacy verse, Maruja wrote, “I can say to the next generations, always follow your dreams, do not give up easily because if you trust in God, all things are possible – and your dream will come true – but in God’s time.” Funeral services will be held in St. John Bosco Parish on December 16, 2020. Sister Maruja’s final services, due to the Coronavirus pandemic, will be private (Sisters only) and held in the Motherhouse chapel at Graymoor. Burial will be in St. Joseph’s Cemetery on the Sisters’ Motherhouse grounds. In lieu of flowers, donations can be made to the “Franciscan Sisters of the Atonement” (41 Old Highland Turnpike, Garrison, New York 10524). Funeral arrangements by Dorsey-Carlone Funeral Home.

The family of Sr. Ana Maria Causa SA created this Life Tributes page to make it easy to share your memories.