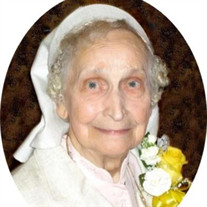 Sister Agnes Clare (Josephine Marie) Vitale, a Franciscan Sister of the Atonement from Graymoor, died in the early morning hours of Thursday, July 2, 2020 in the Lurana Health Care Residence at St. Francis Convent, Garrison, NY. Born on November 26, 1919 in the upper east side of Manhattan, NY to the late Carmela (Salvino) and Vincenzo Vitale, Sister was raised in Brooklyn. Sister is survived by her Sisters in Community, and her remaining brother, Thomas Ventura. She is predeceased by two sisters, Lucille and Eleanor, and four brothers, Edward, Joseph, Sam and John. Sister is also survived by her closest niece, Kathy, several other nieces, nephews, great nieces and great nephews, and many dear friends. When in high school, Sister attended an inspirational vocation fair offered by various religious orders and then desired to become a missionary. At 18 years of age, “Josephine” entered the community of the Franciscan Sisters of the Atonement on March 29, 1937. As a novice on September 29, 1937, she received the name Sister Agnes Clare. She professed her first vows on October 1, 1938 and her final vows on September 2, 1944. As an Atonement missionary for 82 years since first profession, Sister served in various areas of parish, catechetical and pastoral ministries. Her missions included: New York State (Morrisonville (1938-1939), Motherhouse (1939, 1952-53), Schenectady (1953-54), Schuylerville (1954-55), Lake Placid (1955-59), Port Leyden (1959-65), Adams (1965-71) and Amsterdam (1971-2013). Sister’s missionary endeavors abroad included a 12-year assignment in Rome, Italy from 1939 to 1951 at our convent at Via Monte del Gallo. While in Italy during the war years, Sister cared for war orphans. Sister shared that she endured near starvation, lack of running water, diseases, bombings and death threats. Several of the orphans from those years remained in touch with Sister for years ~ a couple of them until this day. After leaving Italy in 1951, Sister returned on a few occasions to visit friends in Rome, Quadrelli and Assisi. In 1951 Sister returned to Graymoor and then, in January 1952, went to Camden, NJ to attend school and then returned to Graymoor until she was assigned to a parish in Schenectady, NY in September 1953 and then the other New York State parishes listed above. Sister Agnes Clare also served two terms in Leadership in the Community: fourth councilor from 1972 to 1976 and second councilor from 1976 to 1978. During these years, she continued to live and minister in Amsterdam, NY where she ministered for 42 years, returning to Graymoor in September 2013. Sister loved each of her ministry assignments throughout the years and wholeheartedly offered herself in the service of the Lord and for the people. She was well-known for her generosity and hospitality to others. She had a special fondness for children and in reaching out to others in need. Having spent so many years in Amsterdam, NY, Sister loved the people there. She was the superior of the convent on Market Street, and later moved to the senior subsidized housing when the convent closed, remaining there until 2013. Sister coordinated religious education for St. Michael’s and St. Mary’s parishes. She was well-known for her Halloween decorating and distribution of candy to over 200 children, including next generation offspring. Sister made many friends in Amsterdam who continued to write, visit and send gifts to her and the other Sisters even after she returned to Graymoor. In 2007, Sister was the recipient of the Mary Reed Newland award (Mary Newland was an author and advocate for Catholic families and children). Sister is quoted as saying, “… the children are our hope for the future of our Church. If they are properly trained and learn to love Christ in themselves and others, we’re on the right track. Respect, commitment and service will develop and help shape the rest of their lives and our Church will benefit. As these children grow to adulthood, they will learn to spread the faith that they have learned to love.” Sister always had a story to tell, and is still telling them in Heaven. Due to the current Coronavirus pandemic, a private wake service was held on July 2, 2020 at Saint Francis Convent, Graymoor and the private funeral Mass was held on July 3, 2020. A Memorial Service with family and friends will be held at a later date when it is safe to do so after the pandemic ceases. Arrangements are by Dorsey-Carlone Funeral Home of Peekskill, New York. Donations in Sister’s memory may be made to: Franciscan Sisters of the Atonement and mailed to 41 Old Highland Turnpike, Garrison, NY 10524.

The family of Sr. Agnes Clare Vitale SA created this Life Tributes page to make it easy to share your memories.