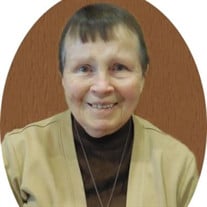 Sister Agnes (Mary Agnes) Rooney, a Franciscan Sister of the Atonement at Graymoor, entered into the Kingdom of God’s glory on Monday morning, June 6, 2022 in the Lurana Healthcare Residence at St. Francis Convent, Garrison, New York. Born on December 13, 1933 in Co. Leitrim, Ireland to Margaret and James Rooney, Sister was one of ten children. Besides her parents, Sister is predeceased by a sister, Margaret (Peggie) Walsh, and three brothers, Desmond, James and Joseph. Besides her Sisters in Community, she is survived by two sisters, Sadie and Rita, and three brothers, Leo, Vincent and Stephen. Sister also has numerous nieces and nephews who fondly cherished her. Having entered the Community in Ireland on January 6, 1952, Sister became a Novice at Graymoor (NY) on October 14, 1952, professed her Vows on October 17, 1953 and her Perpetual Vows on August 29, 1959. As an Atonement missionary for 68 years, Sister was known as an International missionary after serving 14 years on our missions in Brazil (Jatai & Goiania) from 1976 to 1991 (excluding one year). Numerous other mission assignments were within the United States: Rhode Island (Harrisville); Oregon (Grants Pass), California (Placerville), New York (Canajoharie, St. Cecilia’s in NYC & Graymoor), New Jersey (Newark), Georgia (Douglas), and she also ministered in Assisi, Italy at St. Anthony’s Guest House from 2002 until her permanent return to Graymoor in 2006. Sr. Agnes was truly a Franciscan-spirited Sister who lived in simplicity and had a great love for those less fortunate in the world, and for those of all different cultures. She welcomed the universal world into her heart and prayer-life by extending all that she could offer to others. Sister adapted well to the culture and lifestyle in Brazil and learned to speak Portuguese fluently, aiding her immensely in ministering well to the people. Sister had a way of acknowledging all occupations as peoples’ lives intertwined from farm to table and beyond. People were important to her, just for the gift of their own presence in the world. Thank you, Sr. Agnes, for your great appreciation of everyone … truly a gift of the Creator’s great plan. Due to the Coronavirus pandemic, services were private for the Atonement Community and immediate family members only. On Tuesday, June 7, 2022, the Reception of the Body prayer service was held at 4:00 p.m. and the Evening Prayer/Wake Service was at 7:00 p.m. The funeral Mass was at 11:00 a.m. on Wednesday, June 8, 2022. All services were n the Motherhouse chapel at Graymoor. Burial was in the Sisters’ cemetery at Graymoor.

In lieu of flowers, donations may be sent to: Franciscan Sisters of the Atonement, 41 Old Highland Turnpike, Garrison, New York 10524 (USA).

Sister Agnes (Mary Agnes) Rooney, a Franciscan Sister of the...

Send flowers to the Rooney family.